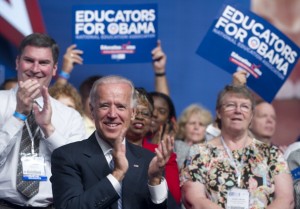 Vice President Joe Biden, a Democrat, arrives to speak at the National Education Association's Annual Meeting in July. Though teachers unions have given most reliably to Democrats, their support has wavered on some down-ballot races.

“It was the middle of July, and the race to represent Indiana’s 36th district in the state senate was heating up,” writes education reporter Joy Resmovits in a Huffington Post piece noting teachers unions aren’t backing down-ballot Democrats quite as reliably as they used to:

Then, something unexpected happened.

Faced with the choice of endorsing the Republican businessman or the school-savvy Democrat, the Public Action Committee of the Indiana State Teacher’s Association (ISTA) endorsed Waltz.

While the move by the state’s teachers’ union turned enough heads to make it seem like a rare occurrence, both national and local teachers’ unions have recently made endorsements and donations to some Republicans who speak and vote against their values. The GOP nods mark a divergence for the unions, which are typically among the largest Democratic donors.

Resmovits notes other endorsements of Republicans or other conservative groups in Idaho, Tennessee, Pennsylvania and Alabama. The HuffPo piece continues:

“We are moving away from party affiliation, instead focusing on where these members supporting public education are,” Mary Kusler, NEA’s advocacy chief, told The Huffington Post…

More simply, this means teachers unions are supporting a handful of members of a party that criticizes unions in its national platform — as we touched on during the Republican National Convention. As New Jersey Gov. Chris Christie told his fellow Republicans, “[Democrats] believe in teachers’ unions. We believe in teachers.” 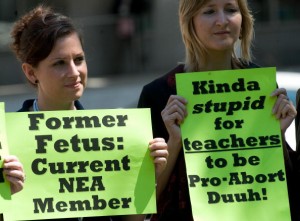 Anti-abortion members of the National Education Association (NEA) demonstrate outside the Washington Convention Center during the association's annual meeting in Washington on July 2, 2008.

“Teachers unions contribute 95 percent of their funds to Democrats — a rate that’s above average among labor unions across the board,” writes Mike Beckel of The Center for Responsive Politics.

But unions like the ISTA breaking with candidates like Mary Ann Sullivan shows how difficult it is to paint education policies down partisan lines. Indeed, many teachers union sympathizers have even expressed only lukewarm support for Obama’s re-election.

“I am voting for Obama for a host of reasons. Education is not one of them,” New Jersey music teacher @jerseyjazzman wrote on Twitter.

Historian Diane Ravitch criticized Obama’s Education Secretary Arne Duncan for his stances, which lead many public education advocates to feel as though electing GOP candidate Mitt Romney would not change much about the current direction of the nation’s school policies.

In a contrast to Kusler’s words, the Indiana Democrats for Education Reform (INDFER) sent out a scathing press release saying the ISTA’s endorsement of Waltz “undermines [the union’s] credibility.”

“Waltz, vote after vote, has attacked public education in our state,” INDFER president Larry Grau wrote, “and pushed extreme positions that would harm teachers and their ability to succeed in the classroom.”