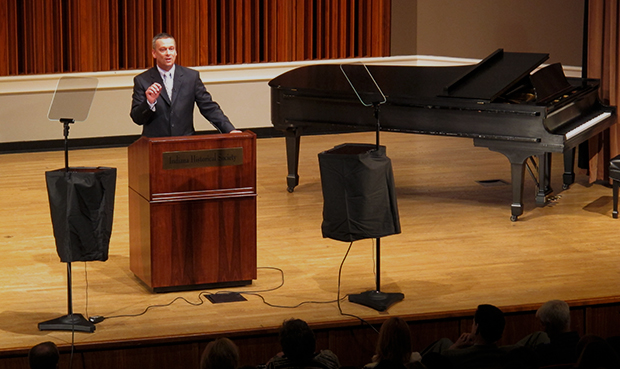 Six weeks before Indiana voters head to the polls, state superintendent Tony Bennett will address an Indianapolis audience Tuesday night and statewide television audiences over the next two weeks.

It’s an official Indiana Department of Education event, not a campaign event. But much like the State of the Union and State of the State addresses, education policymakers are sure to closely watch Bennett’s remarks for clues about how he might handle a second term — should Indiana voters elect him to one.

Bennett, a Republican, must first face Democratic state superintendent candidate Glenda Ritz in the November election. Ritz will not speak Tuesday night, but has recorded a response that will air on the tape-delayed radio and television broadcasts of the address. (We have the statewide TV schedule below the jump.)

We’ll have live video and live commentary of the address, which is expected to begin at 6:00 p.m. ET.

Gov. Mitch Daniels, a champion of much of the education overhaul for which Bennett has also become a poster boy, will make remarks introducing the state superintendent before the speech.

During Bennett’s time in office, statewide standardized test scores have increased by 8 percentage points. It’s hard to imagine Bennett skipping over that statistic in his address.

But perhaps more illuminating will be how Bennett looks to the future. He used the address last year to call for legislation that would have required Indiana students to take at least one online course before graduating from high school. (That proposal ultimately petered out in the General Assembly.)

In a similar fashion, I’d bet Bennett will advocate for broadening the state’s authority to intervene in or take over schools with poor test scores. Why? Here’s a story we posted earlier this month from our colleague Brandon Smith:

Superintendent of Public Instruction Tony Bennett says he wants to see the General Assembly address state intervention on a broader, district-wide level — and he wants that discussion to take place as soon as possible.

“It’s not in the state’s best interest to operate schools,” he says. “Schools are best operated locally. But the state cannot — and as long as I’m the superintendent, will not — tolerate poor performance of schools and use local control as an excuse.”

Behning says changing rules on state intervention could take a long time but wants to see the process begin next session.

As Bennett reflects on his four years in office, it’s important to note he’s been a controversial figure.

He’s become a rock star for those who favor expanding school choice and tightening accountability laws for schools with chronically poor test scores. But policies he’s supported have also invited the criticism that Indiana’s school culture is becoming too focused on standardized tests.

Here’s when Bennett’s address will air on statewide public television: