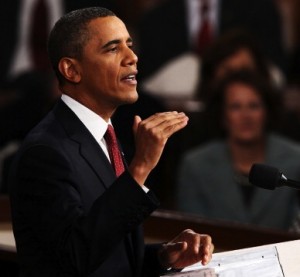 This is a guest post from Molly Bloom, a reporter for our sister site, StateImpact Ohio. The post originally appeared here.

Making college less expensive for students continues to be a key talking point for the Obama administration. In the State of the Union, he pushed a package of state and federal policy changes to address rising student debt.

Let’s review the major education themes in this year’s State of the Union.

THE STATE OF THE UNION EDU-RECAP

“Now you need to give more community colleges the resources they need to become community career centers -– places that teach people skills that businesses are looking for right now, from data management to high-tech manufacturing.”

2. Give schools more money to reward good teachers and more flexibility to fire bad ones.

“Teachers matter. So instead of bashing them, or defending the status quo, let’s offer schools a deal. Give them the resources to keep good teachers on the job, and reward the best ones. And in return, grant schools flexibility: to teach with creativity and passion; to stop teaching to the test; and to replace teachers who just aren’t helping kids learn.”

3. Make kids stay in school until they graduate or turn 18.

“We also know that when students don’t walk away from their education, more of them walk the stage to get their diploma. When students are not allowed to drop out, they do better. So tonight, I am proposing that every state — every state — requires that all students stay in high school until they graduate or turn 18.”

“So let me put colleges and universities on notice: If you can’t stop tuition from going up, the funding you get from taxpayers will go down. Higher education can’t be a luxury -– it is an economic imperative that every family in America should be able to afford.”

He also said states should increase their higher education spending (down 4 percent over the past five years) and colleges, in turn, should keep their costs down:

“If you can’t stop tuition from going up, the funding you get from taxpayers will go down. Higher education can’t be a luxury -– it is an economic imperative that every family in America should be able to afford.”

You can read the full speech transcript here.

Did you watch the speech or participate in the Department of Education’s post-speech chat session? What do you think of Obama’s education priorities?

Guest author Molly Bloom is a StateImpact education reporter based in Kent, Ohio.