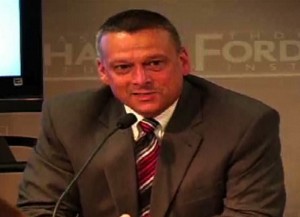 There may not really have been anything on the line at the Education Reform Idol event in Washington — other than a trophy the organizers had bought on Craigslist, that is, and the title of “Reformiest State 2011” from the right-leaning Fordham Institute.

That didn’t stop Tony Bennett from going into Thursday’s debate with guns blazing.

“I feel like Larry Byrd when he showed up in the locker room before the first ever three-point contest and said, ‘I’m here to find out who’s gonna finish second,” Bennett said, drawing some chuckles from the audience and his competitors from Florida, Illinois, Ohio, and Wisconsin. “I’m not here to be self-deprecating.”

In the end, the judges swooned over the education overhaul Bennett championed, voting Indiana “Reformiest State 2011” in a cakewalk.

The win at the just-for-fun Ed Idol event shouldn’t have come as a great surprise — Bennett did get a lot of free pub from us, as we reported on the event a few weeks ago. (Not trying to take credit… Jus’ sayin’…)

Seriously, though, Indiana’s sweeping overhaul of education has already garned a lot of praise in certain national circles. Like on Tuesday, a national report sizing up teacher evaluation laws ranked Indiana the best among five states.

While the pro-merit pay, pro-school voucher, anti-union crowd may have scored several huge legislative victories in 2011, even judges at the event admitted that implementing the laws — not just writing them well — is key.

One commenter on our original Ed Idol post made the point, “Perhaps it would be much more interesting to hold ‘Education Idol’ after their laws take effect, and after it becomes clear what effect they will have in classrooms and school corporations.”

Bennett argued Indiana had been working particularly hard to implement its legislation.