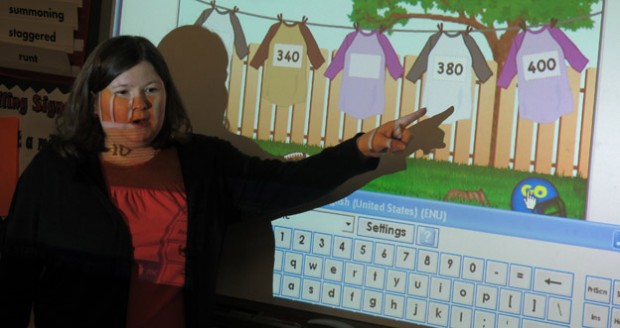 A teacher at East Side Intermediate School in Anderson instructs students about patterns.

For the first time this year, state officials are asking Indiana kindergarteners to meet the same academic standards as kindergartners across much of the nation, from Hawaii to Kentucky.

That’s because this year Indiana’s kindergartens are implementing the Common Core, a set of academic standards now adopted by 45 states. By 2014, all Hoosier students will be held to the nationally-crafted set of standards.

The Common Core could have broad impact on Indiana schools. The standards will bring new — and, state officials say, more rigorous — statewide tests to Indiana by 2015, meaning the Common Core could affect everything from the state’s letter grading system for schools to its fledgling teacher evaluation program.

The National Governors Association — primarily responsible, along with the Council of Chief State School Officers, for drafting the new standards — says the 45 states who’ve adopted the Common Core, in whole or in part, have done so voluntarily.

Still, the scale of the new standards’ implementation is unprecedented. Since the late 1980s, education officials in each individual state have been setting their own academic standards for their students.

“We could have the best standards in the world — define best how ever you want — but if those tests don’t meet the level of excitement people have for them, then the standards don’t matter at all.”
—Jonathan Plucker, IU’s Center for Evaluation and Education Policy

But this has allowed vast disparities in the quality of different states’ standards to develop, says Jonathan Plucker, director of IU’s Center for Evaluation and Education Policy.

“The playing field is so un-level that you can’t even really play on it,” Plucker says.

Ryan Reyna is an education program director for the National Governor’s Association, one of the national groups behind the Common Core. He says the problem with some states’ standards is that students were asked to know about a lot of subjects, but not to know those subjects well. With the Common Core, Reyna says that will change.

“You will be seeing certain grades, certain progressions where there’s more time spent on areas and ideas that are critical— are foundation points moving them through school and into college and careers,” Reyna says.

One example of a “foundational skill” emphasized in the new standards: The Common Core says all third graders should know their multiplication tables by heart before moving to fourth grade. That’s tougher than Indiana’s current third grade standard, which requires third graders to know how to count by 2’s and 5’s and 10’s.

Perhaps Elwood Elementary School, in the small town northwest of Muncie, provides a foretaste of how the Common Core will affect schools.

By order of their principal, Bev Groover, every Elwood third grader has to know her multiplication tables by Spring Break. (Groover herself leads the third graders in Multiplication Boot Camp every day after school.)

Groover knows she’s raising the bar for her students, but she says almost all of the nearly 130 third graders at Elwood Elementary have been up to the challenge so far.

Are Standards The Answer?

If the Common Core standards are to make a difference for students, education policy analysts say schools will need to have access to the right curricular materials and professional development.

“Just saying that kids need to know their multiplication tables at the end of grade three doesn’t mean that teachers know how to teach them that stuff. Or that they’ve got good instructional materials that’s got that content in there,” says Russ Whitehurst, director of the Brown Center on Education Policy at the Brookings Institution.

Plucker agrees. He says the Common Core is a great idea in principle — even though Indiana’s standards are pretty rigorous anyway — but is withholding judgment until statewide tests based on the new national standards replace the ISTEP in 2015.

“We could have the best standards in the world — define best how ever you want — but if those tests don’t meet the level of excitement people have for them, then the standards don’t matter at all,” Plucker says.