Although the school year only recently ended, teachers and administrators are already actively planning for the next.

Teachers and administrators in Jackson County have more reason than usual to get excited for the upcoming year: their rural community is finally kicking off its efforts as part of the On My Way Pre-K, Indiana’s first state-funded preschool pilot program.

Programs in four of the five areas started in January, but in Jackson County, officials wanted to wait so they could make room for more kids, find extra funding and get pre-k providers up to speed.

On My Way Pre-K is off to a roaring start and has brought awareness to the issue of early childhood education around the state.

Four hundred and fifty children received grants to participate in the January launch in Allen, Lake, Marion and Vanderburgh counties. Earlier this spring, Gov. Mike Pence announced the addition of nearly 600 spots for the fall, distributed proportionally among the five counties.

State officials estimate that pilot providers will be able to serve about 2,000 low-income 4-year-olds come August. 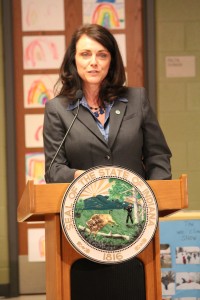 Melanie Brizzi, Director for Early Learning at the state’s Family and Social Services Administration, says it’s hard to pick out the program’s biggest success so far.

“Truly, the joy that families are experiencing and that they have this opportunity for their child has to be number one,” Brizzi says. “Followed closely behind that is the significant quality improvements that we’ve seen occurring in programs, which not just supports the On My Way Pre-K children with high-quality, but it supports all those children in that program.”

Compared with this time last year, the number of preschool providers with a Level 3 rating on the state’s Paths to QUALITY system (a minimum requirement to participate in the pilot) has increased by 27 percent in the five pilot counties. The number of Level 4 ranked providers is up 51 percent.

Following in the pilot’s tracks, communities all across the state are launching preschool programs of their own – perhaps most notably, the Indy Preschool Scholarship Program (or Indy PSP), sponsored by Indianapolis Mayor Greg Ballard. Indy-based organization Early Learning Indiana recently announced a “Partnerships for Early Learners” campaign, a five-year plan aimed at transforming the state’s preschool landscape.

“Believe it or not, we’re better off than we used to be…but we can’t stop there,” Maple said. “”What is different now is momentum. Together, we can take another giant step forward, and another, and another until…we build a system that is ready for and worthy of greater public investment so that all children have a great start to school and life.”

“Believe it or not, we’re better off than we used to be…but we can’t stop there.”
—Ted Maple, CEO, Early Learning Indiana

Brizzi agrees, adding that Indiana is situated in a “perfect storm of opportunity” for public-private partnerships.

“When you bring the right partners together with the right kind of support, this can and does happen,” Brizzi says.

This is something many say Jackson County is doing right. As the FSSA and other state leaders have watched Jackson County get ready, they’ve applauded the community for learning from the other pilot counties, and for building awareness of the program, adding spaces for more kids and improving provider quality.

“Any new program like this, there are certain steps in development and implementation that you just go through,” Brizzi says. “Jackson County has been on top of all of those things. They are doing a fantastic job.”

It’s 10 o’clock on a sunny summer day and Janice Read is rushing around the Girls Inc. facility in Seymour. She maneuvers slowly around groups of giggling little girls on their way out of the gymnasium – summer campers – and motions to tiny child-size furniture and colorful wall displays.

“You can see, it’s a comfort zone, it’s a welcoming environment for the kiddos,” Read points out. 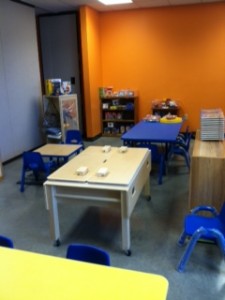 “One of the joys of your smaller communities is we try to use the resources we have collaborative – there’s no reason to duplicate something when you can use it together,” Read explains.

This is a big step for Jackson County. Last summer, when Gov. Pence selected the community for the pilot program, the area boasted only two pre-k providers with a Level 3 Paths to QUALITY ranking. Their goal was to have 10 qualified providers on track to host 100 eligible kids by August.

They now have 13 eligible pre-k providers and 160 open spaces for low-income four-year-olds.

That’s thanks in part to community partners such as Child Care Network. The group has worked to secure two classrooms for 30 additional seats at Girls Inc. as well as neighboring Brown Elementary School.

These are partnerships that have worked to the benefit of the program in more ways than one.

“Many of [the kids attending Girls Inc.] have siblings. In fact, we’ve enrolled a child that has a sibling here and the mom was just thrilled,” Read recounts. “In a small rural county, it’s word of mouth that’s successful. A billboard, a sign, a newspaper article, a radio announcement – a lot of times, that isn’t as effective as if so-and-so talks to me at the laundromat, or I hear it because I’m at Walmart and somebody’s talking about how much their child is growing and learning.”

“I suspect that’s the same in the larger communities, and they just do it in neighborhoods,” Read wonders aloud. “For us, Jackson County is our neighborhood.”

Another development brought about by community ties: the addition of fresh, energetic faces leading the efforts here — faces like Kathy Haper, a retired teacher with whom Read connected through mutual friends.

“They need[ed] somebody that could spend their time doing just this,” Haper says as she organizes shelves in the new Girls Inc. classroom. “I had to work with the state, I had to work with licensing and make sure you have everything that follows their rules.”

“What are the long-term outcomes from this? It’s not just that they’re kindergarten ready.”
—Natasha Langford, On My Way Pre-K Project Manager
A second new figure is Natasha Langford, who started as Jackson County’s On My Way Pre-K Project Manager in March. Langford knows from experience what a lot of the parents who could benefit from the pilot go through.

“A few years ago, my middle son was not kindergarten-ready, and I thought, ‘Wow, how did I miss the mark?'” Langford explains. “I was really interested in making sure other parents didn’t have that experience on the first couple weeks of school, that they went in and their child was ready, and they were able to have a smooth transition into kindergarten.”

Langford is part of the team at the Jackson County Education Coalition – headed by Executive Director Dan Hodge – working to get all the sites ready. She visits providers to answer questions and coordinates for them to meet with state coaches, who help get them up to speed for Paths to QUALITY purposes.

Sometimes, it’s money that can make the difference in getting a provider up to par for the pilot. 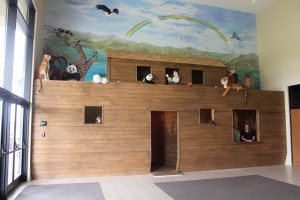 You wouldn’t be able to tell that Lord’s Lamb Preschool, a faith-based classroom situated inside Cornerstone Church in Seymour, only recently reached Level 3 status. The entrance boasts a large artistic reconstruction of Noah’s Ark, complete with stuffed animals lined up two-by-two, and the classroom itself is full of supplies.

Pre-k is not new here: mother-daughter team Amanda and Edie Thompson have been running this preschool for about five years. But it’s not hard to notice what is new: some crisp new books and a sand table yet untouched by little hands. Lord’s Lamb applied for and received some grant money that allowed them to buy items necessary to bring their facilities up to par for the program – and, Edie Thompson says, for the students.

“Our main goal is to give them a love for learning, a love for school. That’s the highest on our list. That they enjoy school and want to be there,” Thompson says.

“It could be as small as a $500 investment in these programs that really takes them from a Level 1 to a Level 3,” Langford explains. “That has been so crucial here, moving all those providers up and making sure that we have those grants available.”

The same is true just a few miles away at Brownstown Christian Daycare, Ministry and Preschool. Director Tina Howell was able to receive a reimbursable grant of about $16,000 to be 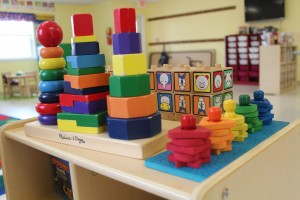 Building blocks were among wome of the new materials Tina Howell was able to purchase for her pre-k classroom at Brownstown Christian Daycare. (Photo Credit: Rachel Morello/StateImpact Indiana)

able to purchase all of the necessary classroom items. The money even provided for new walls to separate the area designated for pre-k students from some of the younger children the facility services.

“They came up with a list of items that we needed to have,” Howell explains, pointing out her purchases. “We have these new items, we also received new curriculum.

“The focus that we have had will continue on and change a little bit. Trying to prepare the kids not just for kindergarten, but for the future,” Howell says.

Because many of the providers are small, the Education Coalition fronted them the money to pay for many of the grants they’ve received so far. Dan Hodge says it was important to do so because these providers are crucial to help recruit the people the pilot is designed to reach.

“That high quality in this town where you only have two or three providers is really key,” Hodge says. “It’s really important in the rural county to really get those providers to make the effort to try to get the kids themselves – they already have those relationships.”

Achieving the Level 3 or 4 status on Paths to QUALITY is a baseline requirement for providers to be part of in On My Way Pre-K, and once you see the variety among the providers interested in participating, you understand why.

At April’s Laugh and Learn Preschool, families will encounter a different environment than at the public and private preschools: April Pagel provides pre-k instruction out of her own home. There’s a chalkboard in the front hall where a mirror might otherwise hang, a family dog roaming between rooms.

But it’s clear that Pagel is just as invested as the other providers. She’s finishing remodeling efforts and lesson plans before the state visits next week to give her a Paths to QUALITY ranking. She says she’s nervous, but excited.

“Nervous about the house part. The daycare part? Nah, we got that!” Pagel laughs.

“This opportunity has provided not only for the On My Way Pre-K kids, but is also going to allow the other kids to have so much higher quality.”
—Dan Hodge, Jackson County Education Coalition
Pagel, a former substitute teacher, had been offering preschool from home for three years before she heard about On My Way Pre-K through a flyer the Education Coalition sent out to registered home providers.

“Honestly, actually, I threw that away because it said that you had to be a Level 3, and was like, ‘Oh, I have a long ways to go!'” Pagel recounts. “[But] the whole process has been exciting and amazing.”

A coach from the Southeastern Indiana Economic Opportunity Corporation, the agency that worked with Jackson County’s in-home centers and providers like Pagel, worked with her to figure out what she needed to reach the Level 3 benchmark. Pagel says the help she’s received from her coach, the state and county officials has been unmatched.

“You guys care,” Pagel says as she turns to face Hodge and Langford. “You’re out there for the education, and I love that.”

At the end of the day, Dan Hodge says Jackson County is ready. He’s proud of how his community is coming together to expand capacity, take advantage of grant opportunities and work to improve quality to make life better for their neighbors.