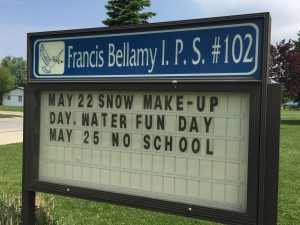 Francis Bellamy preschools is part of the Indianapolis Public Schools system, and is working to improve their program so they can accept students using new preschool scholarships offered by the city and state. photo credit: Claire McInerny / StateImpact Indiana

Linda Hogan stands outside of the fenced in playground at Francis Bellamy preschool in Indianapolis.

Dozens of kids run around playing tag or using hula hoops and other toys. There are screeches and laughter and according to Hogan, this is the only opportunity some kids have to play outside, safely.

“There have been a lot of shootings within five miles of here,” she says. “So that’s why they tend not to be able to go outside like they would in other places.”

Opportunities like these make attending preschool important for kids from low-income families who might not otherwise get to attend preschool.

Since Francis Bellamy is part of the Indianapolis Public School district, families don’t pay tuition like at private preschools, but spots in public pre-k programs are limited and private ones are expensive.

This disparity in access to early education led to the recent push from the state to start a pre-k pilot program in five counties. It also led the Indianapolis Mayor’s office to create its own scholarship program.

Marion County is the only place in the state to have both the pilot program and a city run scholarship program, creating a supply and demand problem for preschool providers. But many in the field of early education hope Indianapolis can serve as an example to other cities on how to incorporate pre-k into the economic and education landscape.

The Push For Preschool At All Income Levels

For years, Indiana lagged behind other states when it came to educating three- and four-year-olds.

Up until a year ago, it was one of a handful of states not providing state run preschool, but last legislative session Governor Pence signed legislation creating On My Way Pre-K, a pilot program funding preschool for low-income four-year-olds in five counties.

Around the same time, Mayor Greg Ballard charged his administration with beginning a similar program for low-income three- and four-year-olds in Indianapolis.

Jason Kloth, deputy mayor for Education at the City of Indianapolis, led this effort and says preschool became a priority after reading research that backed it as a solid investment.

“We were facing a lot of challenges in the city around public safety and the mayor really felt we needed to have a more sophisticated point of view as to how we would tackle this problem,” Kloth says. “Meaning not just more police on the streets but a focus on making sure that children have the educational opportunities available to them that over time would lead them to lead productive and healthy lives.”

Both the Indianapolis Preschool Scholarship Program and On My Way Pre-K grant scholarships for families in poverty to attend a preschool rated Level 3 or 4, the top two levels of the state’s Paths to Quality Ranking system.

On My Way Pre-K will grant scholarships to a few hundred students in Marion County, and the mayor’s program will send around 1,300 kids to preschool. More than 5,000 families applied, proving demand for financial assistance to attend preschool in Indianapolis is high.

“I think it was overwhelmingly positive and just an incredible affirmation of what we all know to be true, which is that all parents want what’s in the very best interest of their children.”

Increasing The Supply Of Pre-K Spots

Francis Bellamy and other IPS preschools have existed for a while, but they haven’t been on Paths To Quality, something they’re trying to change now that the two scholarships are in place.

Hogan says throughout IPS’s pre-k programs, they hope to add 40 new classrooms over the next year, once they get on Paths to Quality. Even though preschool programs in IPS don’t charge tuition, students who come with scholarships will help improve the program by adding to the funding stream.

Hogan said families choosing a pre-k program in the district they live in helps not only the child’s education but the district as a whole.

“Our hope is the families will stay with us within our school district and we hope we will have enough slots so neighborhood children can come to them,” Hogan says. “So that with that they will have an opportunity to matriculate into K, first grade and so on. We anticipate that that’s going to be one of the benefits for families and our school system as well.”

Kloth says the majority of families applying to the city program live within IPS or Lawrence Township Schools, another district preparing to accommodate more students this fall.

The pre-k program in Lawrence Township has been growing the last few years, including getting ranked on one of the higher levels of Paths to Quality. When the scholarships came into play, leaders at the schools say they were already in a place to start accepting these new students.

“We do have another classroom that could be opened if we get to that point,” says Conni Davis, principal of the Early Learning Center at Winding Ridge, a Lawrence Township preschool. “So we are ready to receive students and families and we are looking forward to it.”

Not only are public school districts trying to enroll more students, but private providers are expanding their programs as well.

Ted Maple is the president of Early Learning Indiana, which oversees ten private preschools in the city. His organization will create 80 new spots when they open a brand new facility this fall on the east side of Indy.

“Which is a high need area,” Maple says. “What we’ve learned is that most of the applications for On My Way Pre-K and Indy PSP have come from the east side but there’s very few high quality providers on the east side of Indianapolis.”

Indy As an example to the rest of the state

Watching providers get on Paths to Quality and generally increase the quality of their programs excites Kloth. He says one of the goals of implementing the mayor’s scholarship program was to of course get more kids into classrooms earlier.

“The second policy objective was to change the overall supply of preschool over a five-year period,” Kloth says. “By putting more money into the system, we would increase the overall number of Level 3 and 4 providers across Marion County over that period from 15 percent to hopefully 80 percent of providers.”

And with the implementation of these two scholarship programs, the preschool landscape in Indianapolis is changing. Programs are expanding, the quality of providers is going up, and most importantly, people outside of education are starting to see that pre-k is an investment in a city.

After seeing how popular the scholarships are in Indy, and how much community support there is for early education, Maple says his organization would like to help other communities make the same efforts Indianapolis is making.

“Statewide, we really have a lot of interest in working with partners around the state such as Fort Wayne and Evansville, to ensure that we’ve got high quality programs, that there’s enough capacity in those communities that there’s family engagement strategies in place,” Maple says.

Kids with scholarships from both the state and Indianapolis pre-k programs can start using them in August.