Despite contention in many areas of Hoosier education these days, support continues on all sides for making early education a priority throughout Indiana. 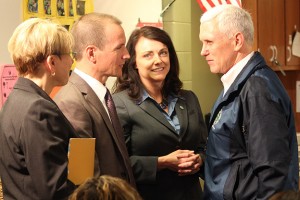 During an event at Wayne Township Preschool in Indianapolis, Gov. Mike Pence announced today the addition of nearly 600 spots for low-income four-year-olds in the fall launch of On My Way Pre-K, the state’s first pre-k pilot program.

Extra spots will be distributed proportionally among the five participating counties – Allen, Jackson, Lake, Marion and Vanderburgh. This will allow local providers to serve approximately 2000 kids during the full launch of the program in August.

“On My Way Pre-K is off to a great start,” Pence told parents and business partners Thursday. “These grants will offer more low-income students the chance to learn and grow in a high-quality pre-K program.”

The increased space comes as a result of additional capacity-building grants totaling more than $435,000 for early learning providers around the state. Organizations including Early Learning Indiana, United Way of Central Indiana and the Lilly Endowment Inc. provided money to fund the grants. The state also contributed funds to the effort.

450 children received grants to participate in the January launch in Allen, Lake, Marion and Vanderburgh counties. Jackson County will get its program up in time to join the rest of the group for the full fall launch.

Families can apply on the FSSA website until the April 30 deadline.