You may have heard national news outlets talk a lot in recent weeks about the federal No Child Left Behind act.

We’ve summarized the law before – it plays into different aspects of education here in Indiana, most importantly expectations for student testing and federal funding for state schools.

Right now, Congress is talking about reworking the measure, and as the process nears completion we thought it would be a good time for a refresher: what is NCLB, how are lawmakers hoping to reshape it and what could potential changes mean for national and local education?

What is No Child Left Behind? 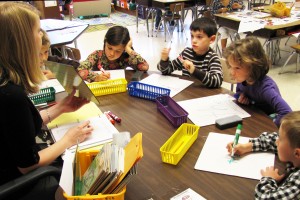 No Child Left Behind is an extensive federal statute that lays the groundwork for school funding in Indiana and across the country. (Photo Credit: woodleywonderworks/Flickr)

NCLB is the current version of the Elementary and Secondary Education Act (or ESEA – we know, lots of acronyms), the nation’s cornerstone education law. ESEA was established for the purpose of establishing accountability and high standards for learning, as well as emphasizing equal access to education to minimize achievement gaps between different groups of students.

The extensive federal statute also sets out the structure for funding primary and secondary education.

Former president Lyndon B. Johnson signed ESEA into law in 1965, and since then Congress has reauthorized the act every five years.

In 2001, the administration under former president George W. Bush made significant edits to the reauthorization, titling it No Child Left Behind. This iteration put heavy emphasis on increased accountability measures for both teachers and students, exemplified by a mandate for states to administer annual standardized tests to quantify student growth and achievement.

Some argue that although the intent of NCLB is admirable, the methods are not. Here’s how NPR correspondent Juana Summers summarizes current debate over the law:

When it started, it was supposed to close gaps in achievement between poor students and students of color and their more affluent peers. And to do that, there are these annual tests in reading and math. Critics say it’s trouble. Teachers don’t like that they’re teaching to these tests and that it just makes students have to take too many tests to actually see results.

It’s primarily these concerns Congress hopes to address as they work to tweak the law.

How could the law change?

Lawmakers have laid out a few different proposals for their colleagues to consider – which has made the rewrite complicated.

The House of Representatives passed its version of the reauthorization Wednesday, titled the Student Success Act. The education team at POLITICO reports this was the second time this year the chamber considered the bill, a Republican-led measure that calls to reduce the federal role in local education:

The House bill would streamline federal education programs and includes language that would allow Title I dollars to follow students to public schools of their choice…The House also approved measures that would shorten the authorization of the bill. Another amendment adopted would allow students to skip standardized tests without the exempted students having an effect on required participation rates for annual assessments. […]

The House’s bill would take big steps to beef up local control in education. It would reduce the education secretary’s power and streamline federal education programs. And it would allow education funding to follow students to public schools of their choice, a measure that’s strongly opposed by the Obama administration but strongly supported by many Republicans.

Indiana representative Todd Rokita (R), chairman of the House subcommittee on Secondary Education, says the bill puts control back in the hands of parents and local leaders.

“We rejected the Washington-knows-best approach that has plagued K-12 classrooms for years,” Rokita said in a statement. “The Student Success Act stops the administration and future administrations from promoting a backdoor agenda that includes Common Core.” 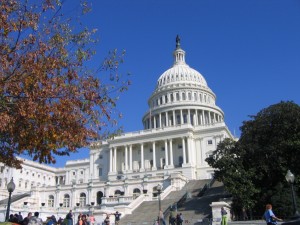 Lawmakers in both the House and Senate are in the process of voting on separate rewrites for the Elementary and Secondary Education Act. (Photo Credit: Rob Crawley/Flickr)

The House vote to approve the measure was close (218-213), demonstrating what many consider the strong partisan politics at play.

The Senate’s own, separate reauthorization measure addresses many of the same tenets, but has been guided by a more bipartisan approach.

Sen. Lamar Alexander, R-Tenn., and Sen. Patty Murray, D-Wash., drafted the Every Child Achieves act, which prohibits the federal government from setting a nationwide set of academic standards, such as the current Common Core State Standards. To the satisfaction of Republicans, like the House version the bill rolls back the federal government’s role, favoring individual states by giving them the power to decide how to use students’ standardized test scores to measure performance.

The measure also includes items to please Democrats, including modest expansions to pre-k.

Debate over this bill is ongoing. Senate Majority Leader Mitch McConnell told reporters after the House passed its bill Wednesday that he expects his chamber to vote on final passage early next week.

Obviously, states would all be subject to whatever regulations appear in a new version of ESEA – unless the feds decide to continue the practice of granting waivers.

In response to criticism that some of the proficiency goals outlined in NCLB were too stringent, the U.S. Department of Education has been approving requests to exempt states from certain parts of the law. As we reported in recent weeks, Indiana is still waiting to hear back about a three-year renewal request for its current NCLB waiver. Some other states have already been approved – but it’s not clear what those renewals will mean if Congress succeeds in rewriting ESEA.

We’re also about to elect a new president in 2016, and no doubt education will be a hot topic on the campaign trail. These figures could impact the path ESEA takes over the coming years, too.