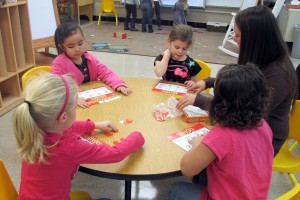 Students play a bingo game to help improve their counting skills at Busy Bees Academy, a public preschool in Columbus.

Parents in those counties will now be eligible for state funds that they can use to send their children to a “quality” preschool–one that is either a Level 3 or 4 on the state’s Paths to QUALITY rating system.

“Every Indiana child deserves to start kindergarten ready to learn and to begin a lifetime of learning,” said Governor Pence in a statement. “The State looks forward to partnering with these counties and working to ensure that these resources are made available to assist some of our most vulnerable children early next year.”

Pence also recognized the 13 other finalists, thanking them for their commitment to Indiana’s children.

The program is on track for a full launch by July 2015.

As we reported, the Indiana Family Social Services Administration (FSSA) announced the 18 counties selected as finalists last month, giving each the opportunity to submit a statement detailing their readiness to participate in the pilot.

“The broad participation and expertise represented in the county submissions demonstrates not only the success of the county selection approach, but also the high level of interest in early learning across the state,” said Melanie Brizzi, Director of the FSSA Office of Early Childhood and Out of School Learning.

The FSSA selected the final five counties with assistance from an advisory group of early education experts representing academia, nonprofit and business interests. The group based its selection process on a determination of need and the county’s ability and readiness to meet that need.

Legislation required that at least one of the counties be rural, but Gov. Pence says that shouldn’t be indicative of what the program will look like in the future.

“We didn’t want to lose sight of the fact that this is a pilot program,” Pence says. “There are communities all over the state of Indiana that made a very impressive commitment to early childhood learning, but I think the focus of the working group was to identify where the need was the greatest, and the largest number of students could be served so that we can study the results. We want to be gathering information to be able to evaluate this kind of a public investment going forward.”

And representatives from Jackson County say they don’t feel any added pressure as the only rural county represented in the pilot.

“All good things start with a great foundation, and whether its children in rural areas or in urban areas, everybody deserves more preschool opportunities,” says Dan Hodge, Executive Director of the Jackson County Education Coalition.

Here’s a breakdown of how many kids each county estimates it will be able to serve and with how many eligible providers, as of July 2015, as provided in their county readiness statements:

State officials say the program could provide pre-K classes for as many as 4,000 low-income children. That number depends in part on how much private money is raised to help fund the program. The FSSA plans to match local funds raised with as much as $10 million.

To qualify, a student’s family must earn no more than 127 percent of the federal poverty limit. That’s a little more than $28,000 for a family of four.

The General Assembly established the pilot program in House Enrolled Act 1004, which was passed earlier this year.