In the waning days of the 2015 legislative session, lawmakers have yet to decide the fate of the State Board of Education. 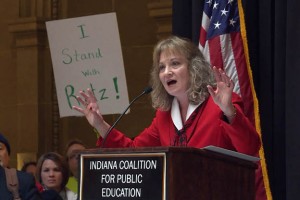 Superintendent Glenda Ritz appears at a rally on her behalf at the statehouse in February. (Photo Credit: Gretchen Frazee/WTIU)

The House Committee on Education held its final hearing Thursday on Senate Bill 1, a measure that would allow SBOE members to elect a chairperson within their ranks – rather than the elected state Superintendent automatically fill that position.

Language added to the measure would also shift who makes board appointments. Right now, the governor names all members other than the superintendent. Many have suggested designating some appointments to various legislators – an idea committee chairman Rep. Bob Behning, R-Indianapolis, echoed in an amendment he proposed early Thursday.

That amendment distributes power for board assignments as such:

House Speaker, in consultation with the House minority leader = 1

Behning’s numbers slightly alter those originally proposed by Sen. Travis Holdman, R-Markle (4, 2 and 2, respectively). Allowing the governor 10 appointments would also allow for two additional members to join the state board (currently there are 10 members total, 11 including the superintendent).

The fact that the issue of board governance has come before the legislature at all continues to anger many, including supporters of current Superintendent Glenda Ritz.

Teresa Meredith, president of the Indiana State Teachers Association, says she questions whether or not they should make such changes.

“I encourage you to use your legislative authority to focus on the needs of Indiana students,” Meredith told the committee. “This hearing does not address any of the bills that would truly impact instruction and growth of students. Those have all been overshadowed by issues of adults.”

SB1 now moves to the full House for a vote.