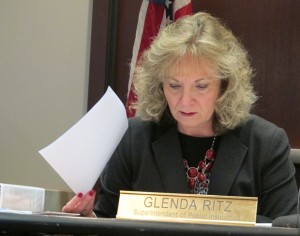 A slew of bills in both the House and Senate would remove the state superintendent as chair of the State Board of Education. photo credit: Kyle Stokes / StateImpact Indiana

After the House Education committee approved legislation last week that would remove State Superintendent Glenda Ritz as chair of the State Board of Education, the Senate Rules and Legislative Procedure committee heard testimony Monday and passed a set of similar bills, 7-4.

Sen. Travis Holdman, R-Ft. Wayne, authored Senate Bill 1, which looks to restructure the State Board of Education. During testimony, Holdman highlighted points of the bill that would reduce the number of board members from 11 to 9 and remove the requirement that the state superintendent automatically chair the board.

Holdman cited his experience on boards of various companies and non-profit organizations to illustrate why these changes could help solve the dysfunction among the SBOE and the board’s relationship with the IDOE. He says smaller boards function better and most boards do not let the CEO of the company serve as chair of the board, citing that as a conflict of interest. Using that analogy the state superintendent would be the CEO of the company (the IDOE) and the State Board of Education the company’s board.

“The structure is inherently convoluted and causes problems,” Sommers said. “I think it’s pretty logical to make the change as quickly as possible.”

Another bill heard by the committee, SB 453, would change who appoints members of the SBOE. Right now, all board members are appointed by a governor. Under this bill, the governor and different members of the legislature would appoint SBOE members, to try and diversify the experience of the board. Sen. Luke Kenley, R-Noblesville, co-authored the bill, and says changing the appointment procedure could help with the current tensions among board members.

“If you had a different composition as recommend by SB 453, no one group has enough votes to control the board but it gives the legislature six appointments out of 13,” Kenley said.

Opponents of the legislation say it disrespects voters by changing the duties of an elected official midway through a term.

Sen. Tim Lanane, D-Anderson, voted against the bill, saying shifting the powers around is similar to Governor Pence’s creation of the Center of Education and Career Innovation last year.