The State Board of Education Committee on School Turnaround hosted a public meeting Friday in Gary to discuss improvement efforts at Roosevelt Career and College Academy, a public high school the state took over in 2011. 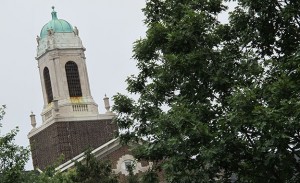 Roosevelt Career & Technical Academy in Gary has been run by turnaround operator EdisonLearning, Inc. since 2012.

Roosevelt is currently operated by EdisonLearning, Inc., a private, for-profit education management company. According to the Post-Tribune, the company has “encountered several maintenance-related problems with the Gary Community School Corp., but in recent weeks both sides say they have ended the bickering and now have a ‘shared vision.'”

Perhaps due in part to that history, representatives from both Roosevelt and EdisonLearning told the committee that the most effective way to attack transitions and operational challenges is to clearly define the role of each stakeholder.

“Its important for both parties to sit down so everyone is clear about the roles and responsibilities of each party,” agrees Roosevelt Principal Donna Henry.

Gary Community Schools Superintendent Cheryl Pruitt says a clear set of expectations for each party would not only decrease confusion and tension, it would help the group as a whole accomplish what they’re really in partnership to do.

“We really should be focusing on the children, and how can everybody come together to do what’s best for these children,” Pruitt says. “How can we serve these children and ultimately the people who live in this community?”

Turnaround efforts have been a central concern for the current State Board. In addition to hearing from turnaround operators at regular monthly meetings, the Committee on School Turnaround – comprised of board members Dan Elsener, Sarah O’Brien and Tony Walker – recently met with school leaders in Evansville. Elsener told audience members in Gary that the board wants to make sure it is making the right moves to help struggling schools.

Elsener said the committee will have recommendations for the State Board by end of October regarding turnaround efforts in both Gary and Evansville.

Board members and Indiana Department of Education staffers have spent a good deal of time in Gary lately.

The school corporation recently received an “F” rating from the State Board of Education, and thirteen of the sixteen schools in the corporation receive a “D” or “F” last year. The state also labeled them as “high risk” earlier this year due to consistently low ISTEP+ scores. The district had the lowest percentage of students passing both the English/language arts and math sections of the ISTEP+ this year  47.7 percent.

Last month, a member of the IDOE’s Outreach Division of School Improvement staff was appointed to spend a year in Gary working full-time with the school corporation.