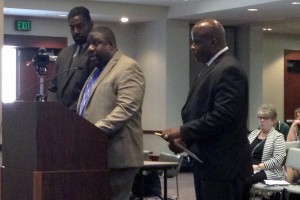 Marcus Robinson, CEO of Tindley Schools, appeals to the State Board of Education to keep Arlington High School Operational. The board heard Robinson's testimony at Wednesday's meeting.

EdPower (also known as Tindley Schools), the Indianapolis based non-profit that oversees five charter schools in the city, petitioned the State Board of Education Wednesday for more money to operate Arlington Community High School for the 2014-2015 school year.

EdPower took over the failing school in 2012, and claim they receive less funding in federal School Improvement Grants (SIG) this year compared to previous years.

SIG money comes from the federal government but the State Board of Education decides which schools in Indiana receive the grants.

Marcus Robinson, Chancellor and Chief Executive Officer of EdPower, testified before the board saying solutions need to be made to keep Arlington operational.

“We’ve come not for a paycheck but for a partnership,” Robinson said at the beginning of his appeal.

In a letter dated June 3 to state superintendent Glenda Ritz written by Robinson, he requests $2.4 million for the 2014-2015 school year.

If they cannot afford to keep the school open, Indianapolis Public Schools could take over ownership of Arlington, but if Tindley abandons its contract to run Arlington the school could shut down within 60 days of the contract’s end.

The board explained if they allocate SIG money to Arlington, funds for all other takeover schools would have to follow suit, forcing the board to make a decision on the school today.

After denying EdPower’s initial petition for the $2.4 million, the board unanimously voted to create a task force made up of State Board of Education members, the Indiana Department of Education, IPS, the Indianapolis mayor’s office (who oversees takeover schools in the city) and EdPower leadership to create a short-term plan to keep the school open through the school year and a possible transition plan for the future.

The task force regarding Arlington must meet and make a decision by July 18.