Families from two Evansville schools met with state education representatives Thursday to discuss how they plan to move forward after half a decade of failing accountability scores. 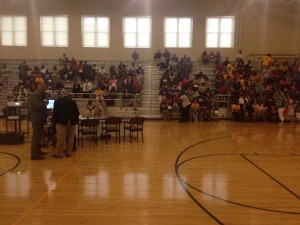 Community members pack the gym at Lincoln School for a public meeting about the school's failing accountability scores.

Superintendent Glenda Ritz and members of the Department of Education and State Board of Education staff, including SBOE Executive Director Robert Guffin, heard public comment at both Lincoln Elementary and McGary Middle School, to solicit input on how to better serve students.

The meeting – required by law since both schools have received failing accountability grades five years in a row – focused on five options for improving the schools’ performances:

School officials have discussed options for months now. They launched their own improvement effort after the 2012-13 school year, involving a new district turnaround office and a contract with Boston-based school turnaround group, Mass Insight.

According to the Evansville Courier Press, school families and staff pushed the DOE to let them keep the schools open and allow them to continue the relationship with Mass Insight:

“Teachers are our solid foundation here,” Kaylee Rumsey, a recent Lincoln alumnae, said. “This school means a lot to me, in a way I grew up in this school and matured a lot.”

Rumsey said she struggled in school, but Lincoln and the staff there helped her find ground in her work, and figure out how she wanted to do with her life.

Superintendent Ritz said the consensus from the meeting rang true with Rumsey’s beliefs, and that people wanted Lincoln to stay “Lincoln.”

“The purpose of the meeting is to gather people’s input, so I appreciated hearing all the different types of input,” she said. “I think the consensus here today was for a partner to be assigned to the schools, and I know the system already has a partnership in place.”

Similar problems plague a handful of other schools in the Evansville district. They’ve had some of Indiana’s worst passing rates on the ISTEP+ exams, as well as poor marks for student growth and college and career readiness.

Schools in their sixth year of “Academic Watch” can face state takeover. State officials also have the option to hire an outside company of their choice to offer turnaround assistance.

The State Board of Education makes the final call on school improvement methods. Suggestions gathered for the Evansville schools will be presented to the board at its next meeting.