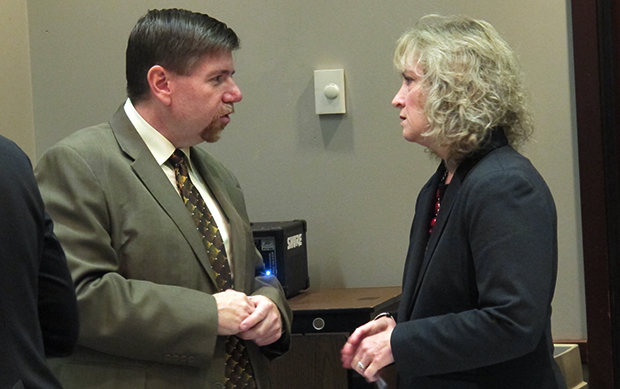 What follows is a brief recap of the latest spat in the protracted, highly-politicized battle for control of Indiana’s top education policymaking panel.

It appears that battle is headed for a conclusive showdown on Friday, with State Board of Education members set to meet to vote on several controversial measures that could limit Indiana schools chief Glenda Ritz’s authority and empower Gov. Mike Pence’s newly-formed education agency.

Both sides are digging in. The state’s largest teachers union, the Indiana State Teachers Association, blogged that State Board members “will remove roles that State Superintendents have possessed as Chair of the board for years” at Friday’s meeting. They asked Ritz supporters to contact board members to express their concerns.

Board member Brad Oliver took to Twitter to respond, saying the ISTA was spreading “misinformation” and that Ritz herself had been involved in public discussions about board procedures.

@smckinley24 You are the victim of misinformation from an @ISTAmembers blog. NASBE is helping @Ritz4Ed & INSBOE to update procedures only.

@smckinley24 Not true…not even legally possible. We are working with NASBE, including @Ritz4Ed to improve our mtg. procedures.

Here’s how the ISTA framed Oliver’s response on its blog:

Since alerting you to Friday’s Indiana State Board of Education meeting and the possible likelihood that Superintendent Ritz’s role as Chair of the State Board of Education could be stripped down, your response has been overwhelming. Our post was shared hundreds of times and your messages of support for Glenda Ritz to the board members have already made a difference.

We are hearing from a lot of you that some state board members are saying that they are wanting to work with Superintendent Ritz. Board member Brad Oliver has said through his Twitter account that the board is “working with NASBE, including Superintendent Ritz to improve our meeting procedures.”

Considering how frayed relations on that panel have become, Friday’s agenda is a minefield. It includes a motion that prompted Ritz to shut down a November meeting (the Attorney General has since OK’ed it) and a set of board operating procedures that has been a point of contention for months.

UPDATE, 4:30 p.m. Eastern: More on the story from Eric Weddle at the Indy Star:

Today, State Board member Sarah O’Brien called ISTA’s claim false. She said representatives of the board, Ritz’s office and National Association of State Boards of Education have been holding teleconferences to discuss how the board should operate. They are scheduled to talk today…

O’Brien said she has received nearly 400 emails since Tuesday afternoon as a result of ISTA’s post. The email addresses of the board members were listed by ISTA. O’Brien said she appreciated the passion of the messages, but said there was no plan to alter Ritz’s power.

“Absolutely not,” she said.