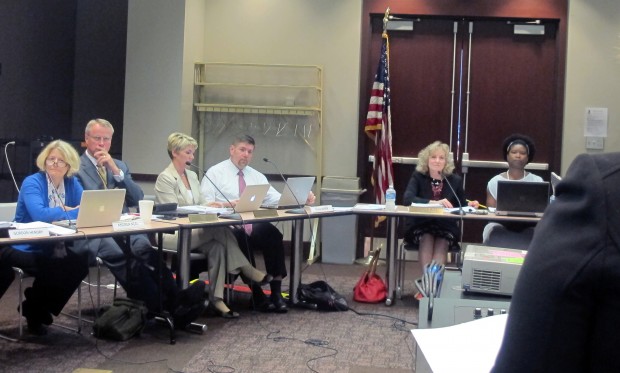 The State Board of Education listens to public testimony during its October meeting.

Tensions between Glenda Ritz and other State Board of Education members were apparent Wednesday after the state superintendent shut down a motion to make changes to the meeting agenda.

At issue was at what point in the meeting State Board staff would update board members on various matters. The agenda listed this item as the last the panel would hear.

Ritz turned down a request to move up the agenda item but said she would allow staff to jump in as needed with information relevant to the discussion. That’s when board members Dan Elsener and Tony Walker offered a motion and a second to modify the agenda.

But Ritz would not allow the vote.

“I have the right to decide how this agenda goes forth,” she said, citing rule that the board’s agenda could be modified at the discretion of the chair.

“We have a motion and a second,” Elsener said. “You’re telling us we aren’t going to be able to vote on it?”

Then board member Brad Oliver jumped into the fray, asking for clarification of the statutory rules regarding the chair’s authority. He suggested that it might be time for the State Board to work on building relationships, perhaps by rescheduling a retreat that was cancelled over the summer.

But on the motion to restructure the board’s agenda, Ritz ultimately prevailed — the board moved on to public comment without a vote on the proposed change.

The terse exchange seemed to rattle two of the parents who testified after. One father whose kids go to school in Pike Township said he’d be deviating from his prepared remarks in light of the argument, urging board members to put kids first. And a Noblesville mother offered props to Elsener for his willingness to ask hard questions.

Ritz may have set the tone for the meeting when she called for a modification of the September minutes, when board members voted in favor of a six-month visioning process with Elsener at the helm. At the time, Ritz said she would not support the plan because it was the first she heard of it.

“I would like the notes to reflect, ‘Superintendent Ritz says the motion was not brought forth under procedure, but she would allow the vote,'” she requested.

Indiana’s open door law allows a public body to deviate from a posted agenda, but Ritz says she feels board members owe it to the public to stick to what they’ve said they will discuss.

The September board meeting was the first after Governor Mike Pence announced the creation of a new state agency that would oversee the board’s day-to-day operations.

“I’ve served on the board eight years,” says Elsener. “I’ve never received so many venomous, negative, accusatory-type emails as I did after the last board meeting.”