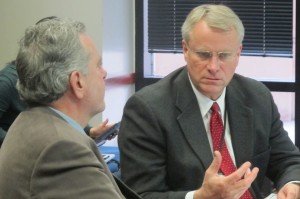 “Do we all agree,” the education consultant leading the Indiana State Board of Education‘s strategic planning process asked Tuesday, “what path we’re on?”

It’s an interesting question, considering the week began with State Superintendent Glenda Ritz and the Center for Education and Career Innovation hashing it out over the details of the group’s regular December business meeting. CECI spokesman Lou Ann Baker told StateImpact in an email the two sides had been unable to reach an agreement on the agenda in time to post it 48 hours before the meeting.

So Wednesday’s meeting will be what Ritz is calling an “orientation session” with representatives from the National Association of State Boards of Education on hand to mediate ongoing tensions between the Department of Education and Governor Mike Pence’s new education agency. It will still be open to the public, but board members won’t be able to take any action.

Ritz met privately with Pence last week to discuss her concerns about the CECI and agreed the board should bring in a representative from NASBE to help define standard operating procedure. The superintendent walked out of the board’s Nov. 13 meeting over what she called an “improper motion” brought by board member Brad Oliver.

But there were no such disputes Tuesday as a partial panel of board members met to discuss a strategic plan. The board voted in September to begin a six-month visioning process with Board Secretary Dan Elsener at the helm. Only Ritz objected at the time saying it was the first she had heard of the proposal.

During the meeting, representatives from the Center for Educational Leadership and Technology walked State Board members through the first steps of creating a strategic plan. The panel broke into two groups to craft a draft mission statement for the State Board.

The mission of education in Indiana is to create a partnership of stakeholders with a relentless commitment to identify and develop talent within every child, in every school, on every day.

Elsener says his group felt defining education as a partnership was key.

“There’s too much teacher-blame-parent, parent-blame-teacher, teacher-and-partner-blame-society,” says Elsener. “I think the partnerships is the biggest one,”

B.J. Watts replied. “Dan alluded to it. You have to have involved parents, committed students and highly effective teachers. If you’re missing one of those three, it’s missing all the time.”

Then Oliver, who worked with Ritz and Watts, offered the other group’s statement:

The mission of Pre-K-12 education in Indiana is to cultivate the learning conditions which promote innovation in teaching and learning, resulting in students who graduate as confident, civic-minded individuals who exhibit the knowledge and skill to be successful if their chosen life pathway.

Freitas thought the group had hit on something with the phrase “chosen life pathway.”

“Not all our students are going to college,” he says. “I like the notion that there are choices for students. There isn’t just one train leaving the station — there are probably 100 trains.”

As the meeting wrapped up, the panel discussed the different stakeholders they want involved in reviewing their plan.

Ritz says she wants to bring in National Board Certified teachers — and she’s open to the suggestions from other board members.

“I was excited actually, about the list of stakeholders, and added a few to it,” she told StateImpact. “I just want to be sure the entire education community gets involved. I really liked the idea Sarah brought forth regarding parents.”

Elsener says the tone of Tuesday’s discussion was a welcome change from recent State Board meetings.

“It’s so refreshing to be with board members talking about real issues,” says Elsener. “People stomping away from meetings seems like a sideshow to me. We were talking at the heart today. What are we about in education, and what can we do together?”

But it’s unclear if the goodwill can continue: Elsener says he’s disappointed the superintendent didn’t put out an agenda in time to call a regular business meeting Wednesday.

Only six members of the State Board are participating in the strategic planning process. The full Board will eventually consider the goals the committee sets out.