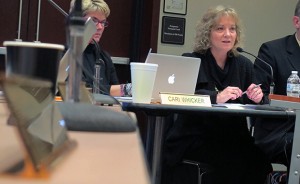 State superintendent Glenda Ritz chairs the February meeting of the State Board of Education.

Chalkbeat Indiana’s Scott Elliott has more on the four private citizens who filed a complaint with the Public Access Counselor against the State Board of Education:

One participant, Ed Eiler, said he was recruited to join the action. Indianapolis labor lawyer William Groth, who provided legal advice, said he did not recruit anyone.

Groth said he was contacted by an intermediary who he declined to name, citing attorney-client confidentiality. Both Groth and Eiler said the action was not sponsored or encouraged by Ritz or the Indiana State Teachers Association. Groth said he has not met Ritz nor represented ISTA in the past. He said he believes he was consulted because of his expertise in the Open Door Law, which the complaint says the board violated. …

Eiler is a Purdue University college professor and the former superintendent of schools in Purdue’s hometown of Lafayette, Ind. He was a passionate and early critic of education reform as former state Superintendent Tony Bennett and then Gov. Mitch Daniels defined it.

He’s also convinced that the Indiana State Board of Education broke state transparency laws when 10 of its 11 members — all of them except state Superintendent Glenda Ritz — jointly signed a letter asking the Republican leaders of the Indiana House and Senate to intervene in a dispute with Ritz over when A to F school grades should be issued. Ritz is the only Democrat holding statewide office. All the other members of the state board were appointed by Republican governors.

As we reported Friday, Eiler, former Merrillville superintendent Tony Lux and two others filed the complaint Friday after Judge Louis Rosenberg dismissed state superintendent Glenda Ritz’s suit against the rest of the State Board.

Rosenberg did not rule on the merits of Ritz’s challenge but agreed with Indiana Attorney General Greg Zoeller, who said only his office can represent the state superintendent in court.

The Public Access Counselor’s ruling is non-binding — the State Board doesn’t have to take any recommendation that comes out of the complaint.

But typically, filing a complaint is the first step someone takes when they feel Open Door Laws were breeched. If the Public Access Counselor finds there’s merit to the complaint, it could be the preamble to another legal challenge.