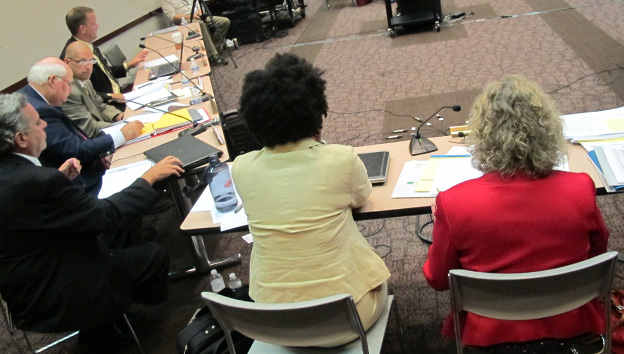 Superintendent of Public Instruction Glenda Ritz chairs the September 2013 meeting of the State Board of Education. (File photo.)

UPDATED, 5:20 p.m. — State superintendent Glenda Ritz has raised the stakes of her showdown with Indiana’s top education panel, naming all 10 members of the State Board of Education as defendants in a lawsuit she filed Tuesday. (Read the filing here.)

The suit stems from a dispute that’s flared between Ritz and the panel over State Board members’ decision to ask Indiana General Assembly for the help of the state’s Legislative Services Agency in calculating this year’s A-F school performance ratings.

According to a statement from her office, Ritz believes “members of the State Board violated Indiana’s Open Door Law” in crafting that request. In her complaint, Ritz asks the Marion County Circuit Court to block the Legislative Services Agency from complying with the State Board’s request.

In a statement, Governor Mike Pence expressed support for the State Board’s position.

“The Governor is confident that all relevant Indiana laws were followed,” the statement reads. “Because teachers and schools depend on these letter grades for salary increases, performance bonuses and federal funding, the Governor will continue to work in good faith with the State Board of Education and the Indiana Department of Education to get the job done for our schools and our kids.”

But Indiana Department of Education spokesman David Galvin says the lawsuit is about more than the State Board’s request to have LSA run the numbers for the state’s A-F accountability system.

Before the lawsuit was announced, State Board member Dan Elsener told StateImpact in a phone interview he and other members of the panel felt the Department of Education has been dragging its feet in calculating the grades.

“There’s either a problem with the competence of the department to get it out, or they don’t agree with accountability and so they’re just dragging it out so we can’t do it,” he said.

“Personally wish that the new superintendent, Glenda Ritz, and the State Board would get along better for the good of all the kids in Indiana. I think that would be really important. They’ve kinda hit the wall, currently,” Leising says. “They’re in a contentious situation right now, which they’re going to need to resolve.”

“I don’t know how the legislature will handle this,” Leising went on to say. “I do know there are legislators that are still concerned about the accuracy of the A-F scoring — there’s no doubt about that — and whether it is being done right. I think there’s going to be even perhaps more of that because of the difficulty with the ISTEP problems this year.”

StateImpact has reached out again to Elsener and the Center for Education and Career Innovation for comment. We’ll update this post with any comments we receive.