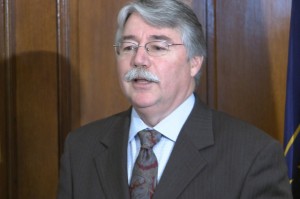 UPDATED, 3:30 p.m. Eastern — Indiana Attorney General Greg Zoeller moved Thursday to block a lawsuit state superintendent Glenda Ritz has filed against members of the State Board of Education from ever making it to court.

Speaking with reporters later Thursday afternoon, Ritz gave no indication she would back down from the suit, but said she was still open to the possibility of a resolution before the matter made it to court.

“In the event that out-of-court resolution is not possible, the courts may be the Department [of Education]’s only recourse,” Ritz said, adding later, “This is about procedure. This is about making decisions in a public arena.”

A spokesperson for Zoeller’s office provided this statement:

This motion notes that as the lawyer for state government and the State’s chief legal officer, the Attorney General has sole legal authority to represent state officials and agencies in court or to permit outside counsel to do so. In-house agency lawyers cannot appear in court on behalf of the State, the motion notes, so the DOE attorneys’ appearances and their complaint filed Tuesday are unauthorized and invalid…

Attorney General Zoeller noted that his office has not taken sides on the Superintendent’s Open Door Law complaint or on the underlying policy disagreement between the Superintendent and State Board of Education. For purposes of this motion filed today, the Attorney General does not represent the 10 individual board members, but rather state government itself and he is asserting that legal authority.

Ritz says she had met with the Attorney General’s office on Wednesday, but declined to discuss the specifics of what was said in that meeting.

UPDATED with context, 1:45 p.m. Eastern: Ritz’s lawsuit accuses members of the board — which she chairs — of meeting behind her back to craft a letter to state legislative leaders.

In the letter, which board member Dan Elsener tells StateImpact was crafted during “conversations in emails and letters,” the members of the panel sought the help of the Legislative Services Agency in calculating the state’s A-F school performance grades.

In doing so, Ritz says the board not only went behind her back, but violated the state’s open meetings law, which would require any “gathering” of the board members for the purpose of taking “official action” to be open to the public.

But one legal expert told StateImpact on Wednesday the superintendent’s case spoke more to the “spirit of the law,” rather than the letter — the Indiana Open Door Law says a string of emails doesn’t count as a meeting. (That, an open government advocate told the Indy Star, is a deficiency with the law.)

Board member Tony Walker has also filed a motion asking a judge to dismiss the case.

We’ve had the data that we needed to complete the A-F grades for last year since late July. We’re told that it would take two or three days to complete the analysis. I strongly support the efforts of members of the State Board of Education to work with the Department of Education and with the nonpartisan with the nonpartisan Legislative Services Agency to get the job done. Our schools are anxiously awaiting the results of these A-F grades.

This post will be updated with any reaction we hear from Ritz, who had been scheduled to speak to the press at 3:10 p.m. Eastern.