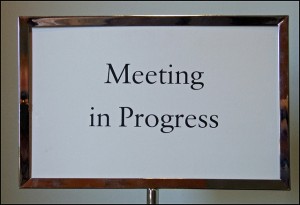 “It’s unclear to me,” tweeted Jennifer Wagner, whose husband Gordon Hendry is a recent appointee to the State Board of Education, “how an alleged [State Board] meeting happened while we were on a beach in Florida.”

Wagner’s referring to the lawsuit Superintendent of Public Instruction Glenda Ritz filed Tuesday against the board’s members, accusing them of violating a state law requiring certain government meetings to be open to the public.

At issue is how ten State Board members managed to approve and affix their signatures to a letter asking for a state legislative agency to assume a role calculating this year’s A-F grades without, in the words of Ritz’s court filing, “meeting in secret,” running afoul of Indiana’s Open Door Law.

According to one board member, it appears as though the bulk of what Ritz alleges to be a meeting took place via email.

In an interview with StateImpact on Tuesday morning before news of the suit’s filing broke, Dan Elsener says he and his fellow board members had “conversations in emails and letters.”

In response to a question, “How did the State Board reach the decision to send the letter?” here’s what Elsener said:

It’s obviously email. We’ve had a series of communications with the superintendent that we really need to get this done and we need the options in a timely way. So I remember various conversations in emails and letters. The past discussions at board meetings— there’s been a lot of concern because one of our big tasks is of course to serve superintendents and principals and teachers and communities well so they have information. We have predictable follow-up on laws and commitments we have. The House when they passed the bill to do the A-F update, update the A-F process, gave us certain deadlines, etc. We’ve been worried the superintendent and her staff, they have not been producing that information.

Under the Open Door Law, Indiana governing bodies at the state and local level must publicize meetings of a majority of its members where any official action is taken 48 hours in advance.

But Steve Key, executive director and general counsel for the Hoosier State Press Association, says under state law, members of the board generally have to meet in the same physical space for the gathering to be considered a “meeting.”

However, Key adds a caveat:

“Let’s say the ring leader had a meeting with two or three other of the members and that’s where the idea [for an official action] was generated. Then the ringleader followed up with phone calls to the rest of the group,” Key says. “What that would create is a ‘serial meeting.'”

But here’s yet another twist: While discussions over a phone call or any “other electronic means” could constitute a “serial meetings,” e-mails do not.

Key says it’s a tough case for Ritz to prove by the letter of the law, although there may be an argument the board members violated the spirit of the law.

“[Board members] continue having these meetings, violating the Open Door Law, and if we’re going to work on improving education, advancing education, [career and technical education] and all these important education issues in the state, then we have to do that by working together,” Galvin says.