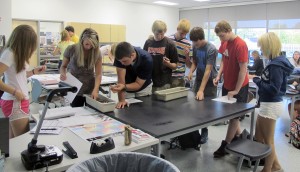 Art students work during class at Columbus East High School. International School of Columbus students will likely enroll in the Bartholomew Consolidated School District if the charter closes at the end of the week.

A Columbus charter school faces closure at the end of the week if it can’t close a $250,000 budget shortfall. From Indiana Public Broadcasting reporter Taylor Killough:

Jonah Sims heads the International School and describes the school’s circumstances as a “chicken or the egg” situation. School officials tried to move the school into the larger building but weren’t able to because it was too expensive. And because the school didn’t move, he says the school’s enrollment dropped from a projected 170 to 116 students.

“How do we have student growth if we don’t have a bigger facility?” Sims says.

Realizing their shortfall, school officials lobbied different public and private organizations for “bridge loans,” but to no avail.

Rich Wagner is the Board Chair for the International School and parent of two students there. He cites a lack of state funding as a major obstacle. He says the $5,500 per student charter schools isn’t enough to pay for facilities, repairs or transportation.

Because state funding for charter schools is dependent on projected student enrollment, the International School is being required to pay the state back the amount of the 49-student difference — nearly $270,000. The school has asked parents for money to cover some of the costs, but it only raised around $18,000.

The school’s board plans to meet Wednesday to make a final decision on closing the school. The Columbus Republic reports that the Bartholomew Consolidated School Corporation should be able to absorb the International School’s 116 students and is lining up guidance counselors to help with the transition.

But the district doesn’t teach the International Baccalaureate diploma, a two-year college-prep curriculum for juniors and seniors. According to the IB website, only 22 schools in Indiana offer the program, and the International School is the only one in Columbus.