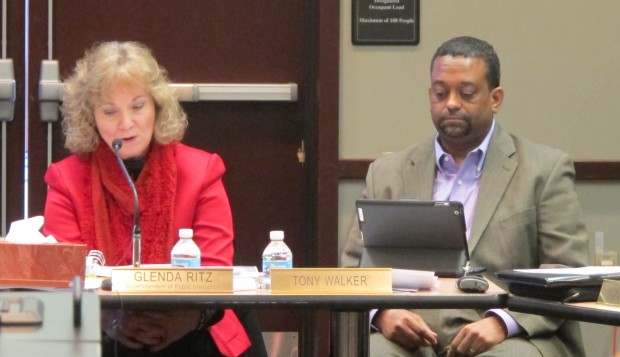 State Superintendent Glenda Ritz and State Board of Education member Tony Walker at the February 2013 meeting.

A member of the State Board of Education has asked a judge to throw out a lawsuit state superintendent Glenda Ritz filed this week, denying Ritz’s allegation that the ten-member panel met behind her back. The Indy Star reports:

Walker, of Gary, said his attorney, Trent McCain, submitted a motion by fax Wednesday to dismiss Ritz’s lawsuit, but the court had already closed. The motion said that Ritz failed to state a valid Open Door claim…

Board members say they didn’t take official action warranting a public meeting but rather asked for help with figuring A-F grades.

Some advocates for open government, though, take issue with the board’s action. Gerry Lanosga, president of the Indiana Coalition for Open Government and an Indiana University assistant professor of journalism, said the “round-robin emails” ought to be considered an “electronic” meeting and not allowed under the law.

“They took an official action, and by the spirit of the law, it should be done in public,” Lanosga said. “But the statute is not well-worded enough that they may be able to get away with it — but it’s still bad policy.”

While she may appeal to a court’s sensibility to uphold the spirit of the law, legal counsel for the Hoosier State Press Association told StateImpact that a string of email communications likely is not enough to violate Indiana’s Open Door requirements.

Ritz will hold a media availability at 3:10 p.m. this afternoon, presumably to address the lawsuit.

What They’re Saying About The Suit

“No one in the Statehouse… has given Ritz an inch to move,” writes the Lafayette Journal & Courier editorial board — while also adding the state superintendent’s own plans aren’t clear:

Whether the state board crossed open meetings law by sending the letter is a gray area. But it’s clear that the lawsuit was drastic action done by someone desperately trying to hold onto something that nearly all of the muscle at the Statehouse is determined to take away.

Why Ritz wasn’t included in the letter sent to Bosma and Long isn’t explicitly stated, but the motives to sidestep her are fairly evident by now…

While the November 2012 election was a referendum on Tony Bennett — Indiana voters were ready to send him packing — and four years of aggressive school reform measures, it wasn’t necessarily a referendum on Ritz as a candidate.

How she plans to run the Indiana Department of Education wasn’t clear when she ran and it hasn’t been fleshed out well in her first year. Even with problems with this year’s ISTEP testing — a big factor in the A-F grades and teacher ratings — concerns about her department’s speed are valid. (Earlier this week, the Department of Education figured A-F grades could expected around Thanksgiving; Bennett was criticized for hitting a Halloween time frame in 2012.)

Who benefits when elected officials engage in battle? Certainly not taxpayers, who ultimately pick up the legal tab. Certainly not their constituents, whose best interests are sidelined during the fight. The time for battle is Election Day, when candidates make their case and voters choose a winner.

The governor and legislative leaders take a chance in forcing this showdown. They are betting that voters rejected Bennett, not the intrusive policies he pushed on local schools. So convinced are they in the popularity of teacher evaluations, Common Core State Standards and private school vouchers that they seem willing to challenge the election’s outcome.

A lawsuit among public officials is no way to debate education policy, but it might be the only way stop elected officials intent on overruling Indiana voters.

What do you make of this lawsuit?