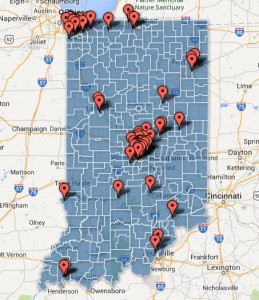 Click here to view our map of Indiana charter schools laid over a map of traditional public school district boundaries.

Feel free to debate my use of the term “doodle” here — our last Friday Doodle was decidedly low-tech.

But I’ve been looking at charter school data lately and found a number worth sharing in visual form:

Of the nearly 300 traditional public school districts in Indiana, 30 of them have a charter school located within their boundaries. (Open up the map to see if your district is one of them.)

This matters because traditional public and charter schools are competing for the same pool of state education funding. That money follows the child to the school in which she ultimately decides to enroll.

Just because it’s a doodle doesn’t mean we have no takeaways for you: