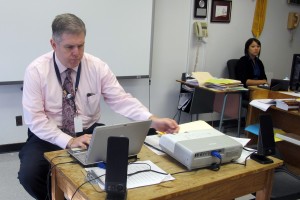 Most of the pushback against Common Core in Kentucky, says Education Commissioner Terry Holliday, is concentrated in areas close to Indiana and Ohio.

“We get a little bleed over now with that,” Holliday tells StateImpact, “but I think that Kentucky was ahead because of our state legislation.”

Kentucky hasn’t seen a statehouse challenge of new, nationally-crafted academic standards known as the Common Core the way neighboring states have. Holliday says that’s because state lawmakers directed his department to raise expectations for students back in 2009 — legislation that predated the Common Core initiative.

“We were very lucky that Common Core was beginning to happen about that same time,” says Holliday, who today sits on the board of the Council of Chief State School Officers, one of the groups that helped write the new standards. “So we engaged in that activity and saved Kentucky a lot of money by working with other states to develop these standards.”

We wrote yesterday that if Indiana keeps the Common Core, some education policy watchers are looking to Kentucky’s KPREP assessment as a possible replacement for the ISTEP+. Partnering with other states that have left the national consortia designing new tests would certainly be more cost effective than Indiana designing its own exam.

“For years, teachers have kind of run their own classrooms, they’ve used their own curriculum and not necessarily followed the state.”
—Dan Withers, Central High School Principal

But it’s worth pointing out that Kentucky and Indiana have been on very different paths so far to implement the new standards. Even before state lawmakers here voted to pause Common Core rollout pending a thorough review, only kindergarten and first grade teachers in Indiana had fully implemented the new standards.

Compare that to Kentucky, where all teachers made the switch back in 2011. Principal Dan Withers says he had to “do battle” with the staff at Central High School in Louisville, Ky., as the school transitioned.

“When I say ‘battle,’ it wasn’t a nasty battle,” says Withers. “It was a real interesting discussion we had on what the state required, what I would like to see and what they said would work.”

Withers says the biggest challenge was getting all of his teachers on the same page. Before, teachers had taught at their own pace and emphasized the topics they thought were important.

Let’s be clear — for Kentucky, the Common Core is a clear step up from the academic standards it replaced. The state’s old standards got a D from the Thomas B. Fordham Institute.

“The standards for high school resemble those for middle school,” according to the report. “At times the standards seem to represent a perpetual remedial course.”

Indiana, on the other hand, had top-rated standards.

“I think it really shifts the debate from ‘Is this a slam dunk? Yes,’ to ‘Should we adopt with additions or with recommendations or with caveats?'” Fordham’s Kathleen Porter-Magee told StateImpact at Indiana’s first Common Core hearing.

But in Kentucky, no one is arguing for a return to the old standards. So when you ask teachers about Common Core pushback, they assume you’re talking about other educators.

“I saw a lot of math teachers who were initially resistant to Common Core at the high school level start to change their mind when they realize there are some changes being made at the lower grades, changes they’d wanted to happen for a long time,” says Ryan Davis, a math teacher at Central.

But English teacher Jonathan Baize says he’s not sure some of the language arts standards aren’t above and beyond what the typical high school students need to know.

“It’s what always tends to happen when you get a bunch of English professors together — they always think everyone is going to study literature in college,” says Baize. “But that said, they’re not bad. And there’s no reason not to adopt the Common Core because so many of them are well-articulated and really focus on what students need to know.”

Baize says his biggest frustration when the district rolled out Common Core two years ago was having to take new tests right away. 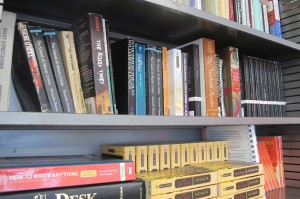 Students at Central High School in Louisville, Ky., have two reading blocks a week that teachers can also use as remediation time.

“Our concern is — and one of the things we feel the pain of — is that your success and failure on assessments is always very public,” says Baize. “Part of the problem is the standards for sophomores and juniors are based on an assumption they’ve been held to higher standards since first grade.”

This year, the school instituted two weekly reading periods that can also be used for remediation. On Wednesdays, kids get content readings in different core subjects. On Thursdays, they read for fun.

But if they’re behind in a subject, teachers can request the time be used for intervention instead. Teachers who aren’t assigned a reading class work with students who need help in their subject area. So far, says Baize, it’s helping.

Still, he predicts it will take a few more years for Central and other Kentucky schools to really complete the transition. For Indiana teachers waiting for state education officials to make a final decision on Common Core, he says to expect an adjustment period no matter what happens.

“Part of the reality of that is the fall always comes,” says Baize. “You know, kids are going to show up. And you’ve got to do something.”