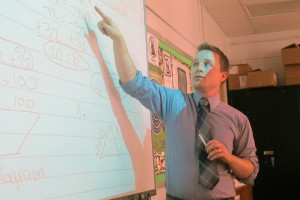 Ryan Davis starts a new unit in his geometry class at Central High School in Louisville, Ky. Davis has been teaching Common Core since 2011 and says the new standards appropriately narrow the number of topics math teachers are expected to cover.

This spring, as Indiana lawmakers debated whether to leave the Common Core initiative, students in neighboring Kentucky were taking new state tests aligned to the nationally-crafted academic standards.

A total of 45 states adopted the new standards for math and English language arts back in 2010. But every state is on a different timeline for implementing the Common Core. Before lawmakers paused rollout here, only kindergarten and first grade teachers had made the switch. Kentucky’s plan was more aggressive. Two years ago, it became the first state in the country to switch to new assessments.

Jamitra Fulleord says her teachers didn’t talk to students about the Common Core specifically, but they did say the new tests would be harder.

“So when the test comes around, of course we’re all nervous,” says Fulleord, a senior at Central High School in Louisville, Ky. “We’re like oh no, we already have like the ACT and the SAT staring at us in the face, so we’re going to have this really hard test.”

And, says Fulleord, the new test was harder. Across Kentucky, the number of students reaching proficiency fell dramatically when the state started testing the more rigorous standards. But they’re back up slightly now. That’s good news not just for Kentucky education officials, but also for education policy watchers here who are looking for signs of what Indiana will do next.

Hoosiers concerned about federal intrusion into state-level education policy convinced Indiana lawmakers to pause Common Core rollout pending a thorough review. But the legislative panel that spent the summer taking testimony on the standards wrapped up its work earlier this month without making a recommendation on what direction Indiana should go.

“The outcome is a little surprising,” says David Dresslar, the executive director of the Center of Excellence in Leadership of Learning at the University of Indianapolis, “because there was so much emotion and so much time invested in this process to not have a report would seem like that time might have been wasted.”

It’s still possible that the legislative study committee could schedule one more meeting this month to send a recommendation to the State Board of Education before a Nov. 1 deadline. Wrapped in the question of what standards the state should adopt next is the need to pick a new assessment because the ISTEP+ doesn’t measure college- and career-readiness. New exams from the two national consortia will, but Common Core opponents are especially wary of the federally-funded assessments.

But according to a report from the Office of Management and Budget, for Indiana to design its own standards and assessment would be expensive.

Kentucky is using a Pearson-designed assessment called the KPREP for elementary and middle schoolers. Kentucky Education Commissioner Terry Holliday says there’s been a lot of interest in the KPREP, especially as states have left the Common Core assessment consortia.

“We own it, we’re probably not going to use the national assessment consortium tests, we’re going to use Kentucky-developed test,” says Holliday. “I think most of our legislators understand that this really was a state-driven process and really isn’t tied up in this national pushback on the Common Core.”

Indiana is technically still a participating state in the Partnership for the Assessment of Readiness for College and Careers, or PARCC. But Governor Mike Pence has said he doesn’t like the idea of a federally-funded test. So even if the State Board votes to keep the Common Core — many of the current members supported it back in 2010 — Indiana may have to look elsewhere for a test.

Of course, even switching to a homegrown assessment isn’t easy. The first year Kentucky gave the KPREP, the number of students reaching proficiency dropped by about a third.

“Certainly we implemented more rigorous standards, but we also implemented programs at the junior and senior year of high school to ensure that kids were ready for the next step.”
—Kentucky Education Commissioner Terry Holliday

“Let’s not talk about the dip,” says Deborah Rivera, the principal of Field Elementary in Louisville, Ky. “We’d rather not revisit that.”

In 2011-12, only 46.5 percent of students at Field reached proficiency on the KPREP — a “needs improvement” on Kentucky’s ratings scale.

The biggest problem, say Rivera, were gaps between what a child should have learned under the old standards and where they needed to be with the Common Core.

To get kids up to speed, Rivera instituted a daily block of time where teachers break students into small groups based on their specific needs. Students get extra help so they can master a particular standard.

The strategy worked — this past school year, 64.7 percent of Field students reached proficiency. It was enough to raise the school from the 13th percentile in Kentucky to the 78th.

“I would rival a fifth grader and the answers and responses they give on our KPREP test every year with what their parents might be able to do,” Rivera told StateImpact. “I think as we’re going through these years of Common Core standards, we’re going to see a lot more success for kids as they’re exiting public school in the 12th grade.”

Statewide, the number of high school graduates the Kentucky Department of Education considers college- and career-ready has increased from 34 percent in 2010 to 54 percent today.

Why High School Teachers Can Relate To Indiana

Back at Central High School, math teacher Ryan Davis also thinks the Common Core will better prepare students for college and career. He likes how the new standards organize math topics, especially in the early grades. But he doesn’t like the test Kentucky is using to assess high school students.

“Pretty much every math teacher I’ve talked to would much prefer to be focused solely on the Common Core than these other bodies of standards because Common Core in math does narrow the focus the way that it should,” says Davis.

Kentucky teachers helped write the questions that became the KPREP. But in the state’s high schools, education officials decided to go with a product from ACT called Quality Core. It’s similar to the Common Core, but not an exact match. 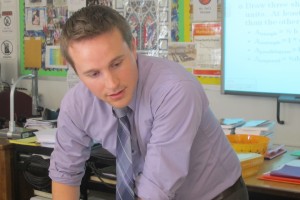 “So we still very much feel that tension of two sets of standards documents competing for our attention and our time,” says Davis.

It’s a similar situation here in Indiana. Technically, all teachers were to be moving towards the Common Core before state lawmakers voted this spring. But teachers in the upper grades still had to focus on the material from the old standards students needed to pass the ISTEP+. And there’s frustration that educators still don’t know what test is coming next.

For Davis’ part, he’d like to see Kentucky move to one of the consortia tests once the state’s contract with ACT expires. Commissioner Holliday says changes coming to Quality Core mean the state will have to explore all of the options before it selects a new exam for its high schools.

He says even if Kentucky doesn’t go with one of the consortia tests, it’s possible Kentucky students could see items written by PARCC or Smarter Balanced on their exams in the future.

Right now, there are about a dozen initiatives to design new Common Core-aligned tests. Apart from the national consortia, there are individual state efforts as well as outside companies writing tests in hopes of profiting from the switch to new standards.

But education policy watchers say that doesn’t necessarily mean a dozen tests will come on the market in the next few years.

“There’s going to be a retrenchment,” Dresslar tells StateImpact. “The tests are going to come back together. It wouldn’t surprise me if there’s one test ultimately to test the Common Core. Because remember — the Common Core is one set of standards.”