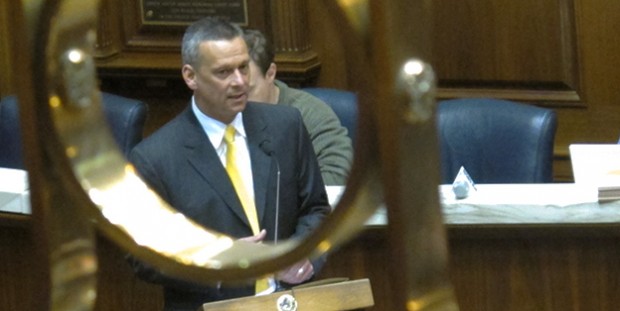 Then-state superintendent Tony Bennett speaks on the floor of the Indiana House in April 2012.

If you’re in need of some good bedtime reading — or an effective sedative — open Title 511 of Indiana’s Administrative Code. Flip to Article 6.2.

This is the administrative rule that establishes the A-F grading formula many now accuse former state superintendent Tony Bennett of manipulating to benefit a favorite charter school. Give that rule a read. Try to stay awake. If you do, you’ll find a roadmap for calculating a school’s rating.

But if you’ve followed our coverage of the changes Bennett’s staff made to the 2012 grading formula — changes that benefited not only that favorite charter school, but 164 other schools across the state too — you will notice one thing missing from the rule:

Wait — “subscore ceiling”? We explain the scoring practice in this video — it’s apparently the thing state officials changed to lift not only Christel House’s A-F grade, but the grades of 164 other schools too.

As we’ve written and explained, the subscore ceiling is the scoring guideline that Bennett’s staff changed sometime after September 13, 2012, thereby lifting those 165 schools’ grades — most of them from B’s to A’s.

But the words “subscore ceiling” don’t appear in Title 511. As far as we can tell, the rule doesn’t mention anything like a subscore ceiling, either.

It appears as though the guideline Bennett’s staff disregarded to change the grades of 165 schools was a guideline they themselves created but which was never enshrined in state code.

We offer this as a point-of-order in the debate over whether Bennett and his staff acted appropriately — and within the letter and spirit of state rules — in changing the grading formula.

The question is what to do with bonus points schools can receive for student growth. Under the ceiling, schools could not receive more than 4 points for either their math or English subscores even though it was theoretically possible to earn up to 6 points total.

Terry Spradlin, director of education policy at IU’s Center for Evaluation and Education Policy, told StateImpact in an interview:

Conceptually, for math or language arts, a school could get a 6.0. But it was clear in [state officials’] documentation and in their public remarks that when it came to computing the overall GPA that those grades would be capped at 4.0. So the bonus points wouldn’t count toward the overall GPA.

At some point during the discussions — and this was less visible, I don’t remember this being mentioned, the rationale for changing that staunch position — it was changed so that bonus points could be included in the overall GPA.

There’s nothing wrong with that. That’s just a philosophical position… But after a long period of time where one position was taken, then, it seems, late in the game, there was a change in that position without a real thorough explanation publicly as to why that change occurred.

Two ongoing investigations into how state officials calculated the 2012 grades are supposed to wrap up by Labor Day.

(If none of this makes sense, by the way, read this.)