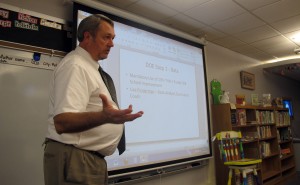 There aren’t any schools that small in Indiana. But there are schools like Rockville Elementary, which received a D in the state’s A-F school accountability system. In a school of 415, one student’s performance can be difference between a D, which triggers state intervention, and a C, which does not.

The way the state calculated A-F grades for schools is new this year. That’s why Principal Jeff Eslinger called a community meeting to explain Rockville’s D — he wanted to make sure parents knew what the school was doing to improve its grade.

How To Calculate An Elementary School Letter Grade

Indiana school letter grades are based on scores on state standardized tests. Schools get points based on how many students pass the English language arts and math portions of the assessment. They can get bonus points based on the “growth model,” a complicated calculation that compares Indiana students to their peers across the state. (It’s also possible to lose points.) Here’s how those points break down:

Now for growth model. This get complicated. Since we know not every school is Rockville, we’ve broken out the math and tried to keep these explanations simple. But if you’re curious about the actual calculations, keep reading.

STEP 1: Determine the school’s baseline grade using pass rates on state standardized tests. Schools get between 0 and 4 points depending on how many students passed the English language arts and math portions of the ISTEP+. Rockville Elementary’s English passing rate was just over the state average, so they started with 3 points.

STEP 2: Start with scores on the English tests. If the lowest-performing students are making big gains, add a bonus point. Schools earn a point if enough students in the bottom 25 percent show improvement in scores year over year. Rockville missed the bonus in this category by two students.

STEP 3: After looking at the lowest-performing students, look at the rest of the student population. If enough of their test scores make big gains, add a bonus point. That’s if the top 75 percent of students show high growth. Rockville didn’t earn any bonuses here.

STEP 4: If kids aren’t making gains as fast as other Indiana students, take away a point. Schools lose a point if too many students show low growth. Rockville lost a point here because of one student’s score.

STEP 5: Calculate how many of the lowest performing students took the test. The Department of Education wants to ensure that students in the bottom 25 percent are taking state tests. Rockville didn’t lose any points here.

STEP 6: Calculate how many students overall took the test. This is another measure of participation. Schools can lose a point if fewer than 95 percent of students take standardized tests. Rockville didn’t lose any points here, either.

STEP 7: Repeat Steps 2-6 for the math part. I really hope you’re still with me. Rockville started with 2.5 points based on students’ math scores, then lost a point in step 4.

STEP 8: Add up the bonuses and deductions for each portion of the state test. Rockville got 2 points in English language arts and 1.5 points in math.

STEP 9: Average the two scores for the school’s final letter grade. Grades are calculated on a 4-point scale. (Remember your GPA in high school?) Rockville got 1.75 points, earning a D.

So Rockville lost a point in both English language arts and math because too many students showed low growth, dropping their baseline C (2.75 points) to a D (1.75 points). But they almost didn’t lose that point in English. That would have boosted their grade to a C (2.25 points). Picking up a bonus point for students showing high growth would have had the same effect, offsetting the point Rockville lost.

By The Numbers: Where Rockville Lost Points

Still with us? If you’re wondering where the numbers in the above calculations came from, keep reading. The numbers correspond with the steps above:

And that’s how one or two students in a school of 415 can make all the difference in a school’s letter grade.