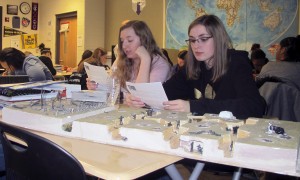 With women earning more college degrees than men and girls earning better grades in elementary school these days, we’re more likely to encounter writers puzzling over how boys can catch up.

Which makes one of this report’s findings a little surprising: on Advanced Placement tests and most sections of the ACT and SAT exams, Indiana high school girls’ scores lag behind those of Indiana boys.

But the report, released Thursday by faculty and student researchers at St. Mary’s College in Notre Dame, Ind., also shows younger girls score as well as or better than boys on the ISTEP+, Indiana’s benchmark standardized test for elementary and middle school students.

Though the researchers don’t offer a definitive explanation for the test score trend, the “Status of Girls in Indiana” report shows young women are more likely than boys to be dealing with a number of physical and mental health problems.

In short, as the Indiana Commission for Women executive director Kristin Garvey told the Indianapolis Star, “There’s a lot going on with adolescent girls.” 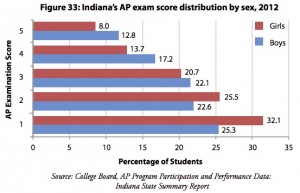 A chart showing the relative performance on Advanced Placement exams by gender. High school students sitting for AP tests receive scores on a five-point scale. A three or better is considered "passing."

One key quote from the 60-page report:

Indiana’s girls [scored] 39 points less, on average, than Indiana’s boys on the math section of the SAT. In addition, Indiana’s girls were at least 11 percent less likely to meet college benchmark scores for mathematics and science compared to boys in Indiana. In Fall 2007, the time that the class of 2012 last took the ISTEP+ (eighth grade), male and female performance on the math section of the ISTEP was relatively close: 74 percent of girls passed the math section compared to 73 percent of boys, with 20 percent of boys receiving pass+ ratings compared to 16 percent of girls. Historically, girls have been known to lose interest in math and science just as they are entering high school, which might explain the poor performance in math and science on the SAT and ACT. Teachers and administrators at Indiana’s schools should encourage girls to participate in the Science, Technology, Engineering, and Mathematics (STEM) subject areas and encourage careers in mathematics and science.

“Maybe girls aren’t getting the same encouragements that they’re getting at the elementary and middle school level for mathematics and science,” Deom says.

The report does outline other areas where girls are outpacing boys.

“Girls [are] more likely than boys in Indiana to pass foreign language and art AP exams,” the report reads.

We’re curious to know your thoughts: What do you think is the story behind these numbers? Why do young women out-score young men, go on to earn more college degrees than men, but still lag behind on most sections of the ACT and SAT?