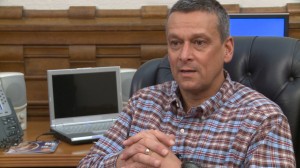 Democratic lawmakers are calling for an investigation into allegations that former superintendent Tony Bennett used state resources to run his reelection campaign in 2012. From Indianapolis Star reporter Barb Berggoetz:

Documents show Bennett, a Republican who left office in January after being defeated by Democrat Glenda Ritz, kept the databases on state computers and once told staff members to review a Ritz campaign speech for mistakes, The Associated Press reported Wednesday.

“If there were (campaign) databases being kept on state equipment and if personnel were being dispatched to do campaign work on their official time, that is a concern that needs to be investigated,” said Senate Minority Leader Tim Lanane, D-Anderson. “I would say that it’s an allegation that should be taken seriously.”

Bennett defended himself in an emailed statement. Bennett, who resigned last month as Florida schools chief, said his request to staff didn’t amount to campaign work, and he didn’t use the lists on state time.

“No, I did not make fundraising calls from my office,” he said in the email. “Any fundraising calls were made using a personal cellphone out of the office. … No, I never asked my Statehouse staff to do campaign work, period.”

The AP article ran with links to calendar entries showing Bennett blocked out time for campaign calls during his unsuccessful reelection bid in 2012.

“I think it’s OK for him to know what his schedule is,” Orentlicher told StateImpact. “As long as whatever he’s doing that’s campaign related is done in a private office with private equipment and it’s not interfering with the time he should spend, in some ways that’s probably useful. If one of the questions is is he spending enough time on his official facilities or is he spending too much time on campaign activities, his calendar can help us out.”

Taken as a whole, Orentlicher says Bennett’s calendar could provide an official record of how he divided his time during his final months in office. He says keeping a database of Republican donors on state computers is more problematic.

“I gather his answer is he wanted a list of people to thank and thank you notes, and the donor list was a good indicator of who he owed than you notes,” says Orentlicher. “It raises interesting questions — he’s writing thank you notes in his official capacity, but he’s only writing to his donors? That does sound more like a campaign thank you note than an official thank you note.”

But whether the former state superintendent could face charges remains unclear. Bennett himself called for an investigation into earlier allegations of wrongdoing after media reports revealed he had changed the grade of a prominent donor’s charter school.

The Indiana Inspector General’s Office confirmed Bennett is being investigated but declined to comment on the nature of the investigation.

“A lot of times you’ll have situations where people are sort of caught, there’s a little flurry of controversy, but it doesn’t thrive to the level of charges being filed,” says Julia Vaughn, policy director for Common Cause Indiana, a nonprofit organization that lobbies for transparency and accountability in government.

But she’s skeptical any investigation will amount to much.

“I believe red flags have been raised, but I’m not at all confident the ethics police in Indiana have the political will to do anything dramatic in this case,” says Vaughn. “We have a real problem with the Indiana Inspector General being an employee of the governor’s office.”

Vaughn says at least one former state superintendent, Harold Negley, faced charges in the 1980s after directing his staff to work on his reelection campaign. He was fined $1,000 and sentenced to 200 hours of community service, according to The Star.

But both Orentlicher and Vaughn say the vast majority of so-called ghost employment violations don’t reach that point.

“The number of investigations is a tip of the iceberg phenomenon,” says Orentlicher. “It’s very easy to use your laptop, your government-issued laptop, for campaign business. So it wouldn’t surprise me if you did a search of every elected official’s laptop, you’d find a sizeable percent where you’d find campaign-related uses.”

Orentlicher says the majority of violations would be small in scale, such as an elected official receiving a campaign email to his or her work account.

“Are you not thinking? Are you being sloppy? Or is this a repeated kind of activity?” she says. “I think that’s something prosecutors and law enforcement look at.”

And with the rise of electronic communication, Vaughn says it’s more important than ever for elected officials to know the rules. Emails sent from state address are a matter of public record.

“You better know what the rules are, and you better keep things straight because you’re going to leave a trail to find,” Vaughn says.