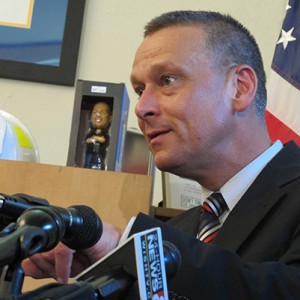 Current Florida Commissioner of Education Tony Bennett, who was Indiana's state schools chief from 2009 to 2013.

The Associated Press’ Tom Lobianco has this exclusive report:

Emails obtained by The Associated Press show Bennett and his staff scrambled last fall to ensure influential donor Christel DeHaan’s school received an “A,” despite poor test scores in algebra that initially earned it a “C.”

“They need to understand that anything less than an A for Christel House compromises all of our accountability work,” Bennett wrote in a Sept. 12 email to then-chief of staff Heather Neal, who is now Gov. Mike Pence’s chief lobbyist…

Bennett, who now is reworking Florida’s grading system as that state’s education commissioner, reviewed the emails Monday morning and denied that DeHaan’s school received special treatment. He said discovering that the charter would receive a low grade raised broader concerns with grades for other “combined” schools – those that included multiple grade levels – across the state.

Read Lobianco’s full story at The Huffington Post, in which the AP reporter tells the story of a “week-long behind the scenes scramble” to change the grading system.

Lawmakers have already thrown out the current A-F model because of other concerns about the grading model’s makeup.