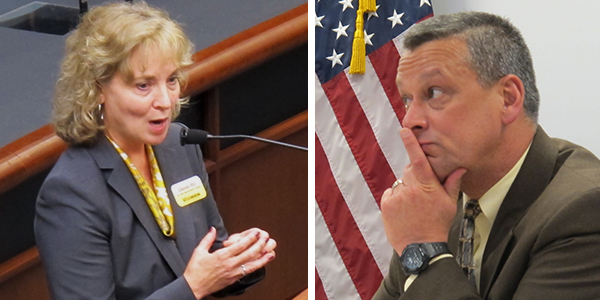 “Hey,” former state superintendent Tony Bennett wrote to his staff in one of the emails the Fort Wayne Journal Gazette published Thursday.

“Below is a link to Glenda [Ritz’s] forum in Bloomington,” Bennett, a Republican, wrote. “I would ask that people watch this and scrub it for every inaccuracy and utterance of stupidly [sic] that comes put [sic] of her mouth.”

While the Journal Gazette‘s report did not speak to the controversy surrounding the ex-schools chief’s changing of Indiana’s A-F grading system, reporter Niki Kelly points out, “State rules prohibit employees from conducting campaign work on state equipment or state time.”

“Attempts to reach [Bennett] by phone and email for comments on this story were unsuccessful,” Kelly added.

“We got emails sent out on school time by people who were supposed to be teaching someone at the time, all about Tony Bennett,” Daniels told the Indy Star.

Most of the emails the Journal Gazette published portray Bennett’s personal dislike of Ritz — who ran as a Democrat — and her policies. (The paper posted the emails on their website here, here, here and here.)

That shouldn’t come as a huge shock — we wrote during the campaign the two diametrically opposed each other on basically every issue.