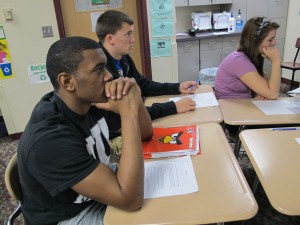 Enrollment in Advanced Placement classes — which promise college-level coursework in a high school classroom — has “soared,” reports Stephanie Simon for POLITICO. “But…”

Data analyzed by POLITICO shows that the number of kids who bomb the AP exams is growing even more rapidly. The class of 2012, for instance, failed nearly 1.3 million AP exams during their high school careers. That’s a lot of time and money down the drain; research shows that students don’t reap any measurable benefit from AP classes unless they do well enough to pass the $89 end-of-course exam.

In its annual reports, the nonprofit College Board, which runs the Advanced Placement program, emphasizes the positive: The percentage of students who pass at least one AP exam during high school has been rising steadily. Because so many students now take more than one AP class, however, the overall pass rate dropped from 61 percent for the class of 2002 to 57 percent for the class of 2012.

Indiana's A-F School Letter Grades: How They Work & What Your School Got

Even more striking: The share of exams that earned the lowest possible score jumped from 14 percent to 22 percent, according to College Board data.

The trend challenges a widespread philosophy that students exposed to higher standards will find a way to meet them. Graded in part by college professors, AP exams provide a fairly objective measure of performance — and the results suggest that when the bar is raised too high, a good number of students trip.

AP courses and the results of their corresponding tests are really important for Indiana high schools and high school students.

Roughly 14 percent of Indiana students earned college credit from an AP exam in 2011 — a few percentage points behind the national average.

When we spoke about Indiana’s A-F grading system with a Ben Davis High School AP Statistics class, the students suggested the state needed to ramp up its efforts to find a way to measure growth in its “career and college readiness” metrics.

As a side-note, the students mentioned some of their peers found it difficult to pay the cost of taking the AP tests — a student must earn a 3, 4 or 5 out of five possible points to get college credit.

“Even really intelligent students… struggle to get a 3 or above. It’s not an easy thing to be able to pass a college-level course,” said Kagan Ferguson, who was a Ben Davis senior when he spoke to StateImpact in May. “And, I don’t know, I feel like a lot of people don’t take it seriously.”