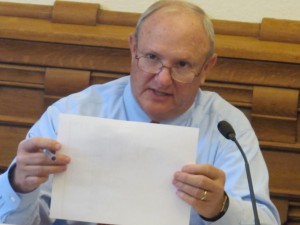 Months before they became a centerpiece in a national news story, Sen. Luke Kenley had questions about Indiana’s A-F school letter grades.

The Indiana Senate’s lead budget author saw many scratching their heads over the grades, which state officials calculate for most schools by combining two metrics: the school’s pass rates on standardized tests and the number of students whose scores showed “high growth.”

“The former grade was mixing the two into one grade,” Kenley told StateImpact this week. “I thought that was creating confusion. People couldn’t tell whether it was growth or if it was actual performance.”

The Noblesville Republican was key to lawmakers’ efforts to throw out the formula state officials used to calculate last year’s grades barely a year after its inception. The State Board of Education must re-write the grading formula by November 15 without using the growth measures at the heart of the old system.

Kenley, however, doesn’t oppose A-F grades in general — far from it. While those who oppose the ratings say emails from Tony Bennett’s time in Indiana prove the A-F grading system is inherently unfair, Kenley says he believes the A-F re-write will create a far more transparent system.

“The question about the Bennett emails is whether the system was or was not compromised, and we’re still trying to learn what that represents,” Kenley says, adding later, “We just cannot afford not to continue with trying to improve education.”

But last week, the leader of the teachers union AFT Indiana called for the “immediate suspension” of A-F grading. Union president Rick Muir read this statement in a press conference:

Bennett’s resignation should confirm that Indiana’s flawed, and now manipulated, A-F grading system is evidence enough to call for immediate suspension of this process… Our public schools have not failed. They have been set up for failure. The A-F system has not only harmed students, educators, and parents, but it has also harmed communities.

In a statement of their own, Indiana Senate President Pro Tempore David Long, R-Fort Wayne, and House Speaker Brian Bosma, R-Indianapolis, reaffirmed their support for the A-F grading system while appointing a task force to review the 2012 grades.

But Muir says he hopes the Bennett email controversy illustrates their fears about the A-F formula to lawmakers.