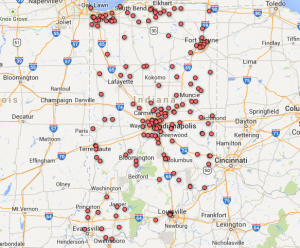 Click here to view a map of 165 schools whose grades improved because of a last-minute change former state superintendent Tony Bennett's staff made to Indiana's A-F grading system.

South Bend Community Schools has become the latest district to take a formal stand against Indiana’s A-F grading system, which is now under intense scrutiny amid a controversy that already cost former state superintendent Tony Bennett his job in Florida.

As The South Bend Tribune’s Kim Kilbride reports, the district’s school board voted to pass a resolution Tuesday to no longer recognize its schools using the state-issued letter grades:

Despite South Bend schools’ new resolution, since it’s a legal requirement, the district, like all others in the state, will still be assigned a letter grade by the state.

But South Bend’s board, along with Superintendent Carole Schmidt, says the resolution sends a message.

“We can’t divorce ourselves from the legislation,” Schmidt said. “What we can do, is take a stand … We won’t be labeling our schools,” she said, adding the practice relies on a single measure — ISTEP scores — rather than multiple student-achievement measures over time.

South Bend, the fifth-largest school corporation in Indiana, joins two other districts who made public stands against the system last week.

Fort Wayne Community Schools’ board passed a similar resolution last week, saying it would no longer label its schools solely based upon their A-F letter grade.

Indianapolis Public Schools officials announced they had filed a request for all public documents related to the state’s 2011 move to take over four of its schools — a move related to the schools’ 2011 A-F grades.

In total, 165 schools across the state saw their A-F ratings increase as a result of last-minute changes Bennett and his staff made to the grading formula, a StateImpact data analysis recently showed.

None of those schools were in the South Bend Community School Corporation. But five schools in the Fort Wayne district and three schools in IPS saw their grades increase.