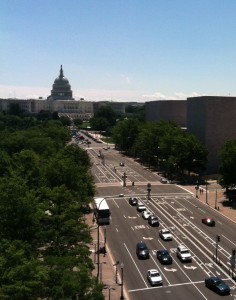 The U.S. Capitol in Washington, D.C.

Well beyond the Beltway, the debate about education has become far more polarized in the past decade. Strange partnerships have emerged on both sides, as anxiety has grown over the lackluster performance of American students compared with children in other countries.

One group includes business executives, civil rights advocates and even some teachers’ union leaders who say the federal government must hold states and school districts accountable for rigorous standards. The other includes conservatives who want to limit the federal government who have found some common ground with more liberal groups that believe corporate and political interests have hijacked education reform.

“There are odd alliances,” said David M. Steiner, the dean of the School of Education at Hunter College in New York. “And it’s a very deep divide.”

Rich points out not one Democrat in the GOP-controlled U.S. House voted last week for a re-write of federal education laws known as No Child Left Behind. Though House lawmakers passed the measure, President Obama threatened to veto the Republican-authored bill.

We’ve pointed out widespread agreement that “No Child” has outlived its usefulness has not been enough to spur federal lawmakers to act — partially because of Congressional gridlock, partially because there’s little political gain in passing a re-write.

But typically, it’s difficult to describe that divide in partisan terms.

One example: Indiana’s debate over the Common Core, which has exposed divisions within the state’s Republican ranks about the direction of education policy.