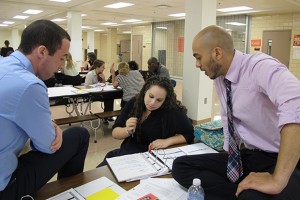 Teachers from the three Indianapolis schools Charter Schools USA is operating discuss curriculum. The company relied heavily on Teach for America recruits to staff the schools.

The Mind Trust will bring more Teach for America recruits to Indianapolis, increasing the number of placements from 140 to 180 next year.

Since Teach for America was recruited to Indianapolis in 2006 by The Mind Trust, its influence has grown rapidly. It now has more than 300 alumni in the city, about 85 percent of whom are still working in public education.

Participants in the program enter an intensive five-week summer training program. Once they complete training, Teach for America places them in schools with high percentages of impoverished children. Participants must be willing to relocate to wherever they are placed and must agree to teach for two years.

The program has been widely praised for helping needy children and criticized by those who think that it does not give its teachers enough training or that it recruits some who have no intention of making teaching a career.

A similar organization, The New Teacher Project, will also receive grant money to add another 50 teachers in Indianapolis next year.

We’ve written before that turnaround operator Charter Schools USA relied heavily on Teach for America recruits to staff the three schools the company is running. The state board transferred control of four takeover schools to the Indianapolis Mayor’s Office earlier this year.