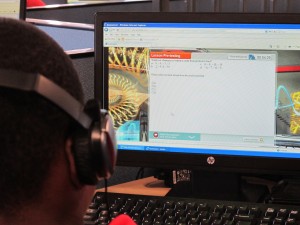 A student works on an online lesson.

Fort Wayne Community Schools… is calling on lawmakers to re-evaluate the state’s system of accountability centered on test scores.

The district will not use the data from the test in its evaluations and will not distribute the test results to parents or teachers “unless and until they can be validated by a legitimate, independent third party.”

“It is now time to pause sanctions related to this test – a test that was not designed to measure all aspects of educational achievement,” FWCS officials wrote in an overview.

More from the AP:

[Testing company CTB/McGraw Hill] has said previously that it was working with state schools Superintendent Glenda Ritz’s office to check the validity of any test sessions that were disrupted.

Ritz acknowledged during a conference call with educators earlier this month that the scores could be in question and indicated a third-party review might be warranted.

“The general public and you, rightfully so, will feel the testing this year is not valid,” Ritz said during the call. “So we are going to be wrestling with the validity of test scores.”

The Lafayette Journal & Courier‘s Dave Bangert later quoted Killion as saying, “It is just a matter of time before parents move off the sideline to join in.”

Consider, also, guidance from the Indiana Department of Education on when districts can appeal their letter grade rating from the state:

With rare exceptions, only statistical errors in the underlying data provide cause for reconsidering a PL 221 (A-F grade) category placement. The corporation or school must submit evidence to support the appeal.