Spencer Lloyd, center, and other teachers in his department work to develop curriculum based on state education standards. Lloyd taught at Manual High School last year and is one of the few educators who will return now that the school is under the management of turnaround operator Charter Schools USA.

“It’s not going to be a light switch we’re going to flip and all the students are going to say, ‘Oh.’”
—Spencer Lloyd, choir teacher

Five Indiana schools will be under new management this fall after a rocky year in transition. It’s the first time the state has used Public Law 221 to take control of failing schools, so when the Department of Education announced it would intervene, no one knew quite what the process would look like.

Spencer Lloyd, the choir teacher at Manual High School, describes what happened last year as “tumultuous.” He’s one of only a handful of Indianapolis Public School teachers now employed by turnaround operator Charter Schools USA. Sitting in his office, he ticks the others off on his fingers.

“So myself, the band director and the art teacher, we all are returners,” says Lloyd. “And then I know there is an English teacher … and there might only be five of us or so.”

Down the hall, a group of new teachers are in Lloyd’s choir room, receiving training on an online system to share lesson plans. Many of them will teach for first time next year.

Lloyd is a young teacher, too, but he’s accomplished a lot in just four years, from packing an auditorium with 3,000 community members for a Christmas concert and taking students to perform at Carnegie Hall. So leaving the program he’d built wasn’t an option.

Teachers who wanted to stay at the three schools CSUSA is operating had to reapply for their jobs. Others found employment elsewhere with IPS.

In May, IPS announced it would lay off almost 100 teachers due to budget cuts necessitated by a loss of state funding from the four takeover schools.

Principal Says Turning Around High Schools Will Be Harder

CSUSA has a four-year contract with the state but has said improving these schools — Manual, Emma Donnan Middle School and T.C. Howe Community High School — might take even longer. Still, new teachers are optimistic as they report for faculty training.

Most school districts don’t offer three full weeks of professional development. On a recent Thursday, CSUSA employees explained how to reverse engineer lesson plans from the Indiana standards students are expected to master.

As teachers work with their departments to design curriculum, Manual Principal Byron Ernest passes through the lunchroom giving a tour to a prospective teacher. Even though school starts August 6, CSUSA is still hiring and students are still enrolling.

“I probably give four to five tours a day through the school of parents and families who will show up,” says Ernest. “And as I’ve always said, it’s not about seeing the facilities it’s the conversation you have while doing it.”

Ernest is new to CSUSA. Before, he taught in Lebanon and had never been a principal before. But he says he’s a big believer in school choice — and for him, the time had come to “walk the talk.”

“It’s not about necessarily the competition for students but it’s about students do have a choice where they go to school.”
—Byron Ernest, Manual Principal

Manual is a good fit for Ernest, a former agricultural sciences teacher. The school already has a strong program, and Ernest says students need more classes where they can see how what they’re learning connects to their life outside of school. He says CSUSA’s approach is all about personalization, from crafting individual education plans to issuing narrative report cards that explain why students received the grades they did. But mostly, he says it will take time to see results.

“We know as students get older, that gap widens and is a lot tougher to get made up,” Ernest says.

Counselors have started building student schedules, but it’s hard to get anyone at the for-profit CSUSA to pin down just how many students have enrolled in the three schools the company will operate. 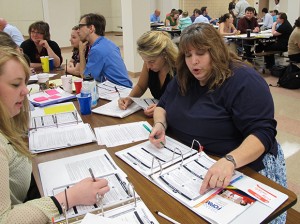 It’s been a contentious battle because money is flowing into the schools based on last year’s enrollment numbers. That leaves the turnaround operators with a windfall and IPS, where many of the students have gone, with a deficit.

At a community picnic last week, CEO Jon Hage told StateImpact enrollment figures continued “to move all over the place” as CSUSA worked to recruit as yet undecided students from IPS.

“I think it’s OK to have some competition for kids to the extend we’re all trying to create better schools,” Hage said.

Principal Ernest puts it this way: “Students do have a choice.”

In February, about 40 percent of students chose to stay with IPS. Now the choir teacher, Lloyd, says he’s waiting to see how many of the students he stayed to teach show up on the first day of school.