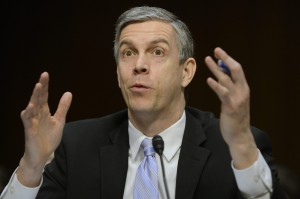 U.S. Secretary of Education Arne Duncan fielded questions about the Common Core from members of the House Education and the Workforce Committee Tuesday, reports Alyson Klein for Education Week:

It took 90 minutes for lawmakers to finally bring up the biggest thing happening in education policy these days: the Common Core State Standards. Rep. Matt Salmon, R-Ariz., asked Duncan whether the federal government is trying to create a national curriculum.

Duncan took umbrage at the suggestion. “Let’s not get caught up in hysteria and drama,” he said. He noted that the Education Department is legally prohibited from putting in place a federal curriculum.

As we’ve written before, implementation of the Common Core is on hold in Indiana after state lawmakers approved a “pause” proposal to give Hoosiers time to review the standards.

The measure gives the State Board of Education until July 2014 to adopt standards that “meet national and international benchmarks for college and career readiness standards and be aligned with postsecondary educational expectations.” It’s likely whatever Indiana ends up with will build on the nationally-crafted academic standards currently adopted by 45 states.

But as Duncan’s response to Rokita illustrates, that doesn’t necessarily mean the Common Core.

Got a question about the Common Core? Let the education reporters find an answer! Send us your Core Question via email or reach out to us on Facebook or Twitter.