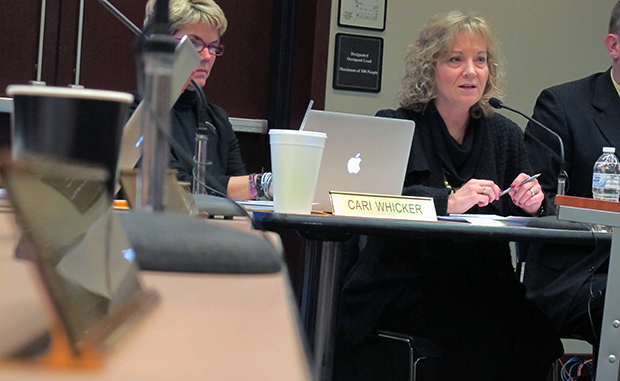 State superintendent Glenda Ritz chairs the February meeting of the State Board of Education.

Nearly 18 months after the State Board of Education brought in new management for five  schools with low test scores, the same body Wednesday voted to hand oversight of four of those schools to the office of Indianapolis Mayor Greg Ballard.

“We plan on working closely with all stakeholders in our community to ensure the success of these schools,” Jason Kloth, the city’s deputy mayor of education, told board members ahead of the unanimous vote.

The handover, Kloth added, will be contingent upon the Department of Education giving the city funding to hire the staff they’ll need to oversee the outside groups currently operating Arlington, Howe and Manual High Schools and Emma Donnan Middle School. 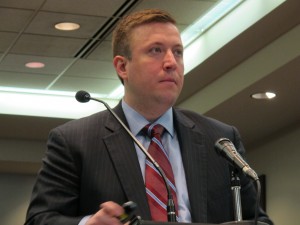 Jason Kloth, Indianapolis deputy mayor of education, presents his case for his office to oversee four schools that had been previously taken over by the state.

As we’ve written, Ballard’s office — as the only mayor in the nation to sponsor charter schools — is uniquely positioned to handle the new responsibilities. And as the Indy Star‘s Scott Elliott has noted, it’s a win-win for the Indianapolis Public Schools’ board, the mayor and new state superintendent Glenda Ritz.

“It gets [Ritz] out of the awkward spot of having to manage takeovers she doesn’t believe in,” Elliott wrote.

Both of the organizations currently running the schools — private company Charter Schools USA and non-profit EdPower — expressed their support for the switch.

“We think this makes sense. We think it provides for local control and support,” said Jon Hage, the president of Charter Schools USA.

Board member Mike Pettibone voted in favor of the handoff, but also repeated a call for the state to define what success means for the takeover schools.

“We’re grateful for their willingness to collaborate,” Hannon said.

Kloth says the move will come at no additional cost to local taxpayers. He says the state would redirect redirect federal dollars to the city to cover the new oversight costs. Kloth says the city would receive no more than $260,000, and will likely receive less.

(This story was updated from first posting with comments from Kloth, Pettibone and Hannon.)