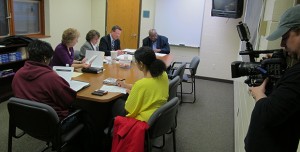 The Timothy L. Johnson Academy, a charter school in southeast Fort Wayne, planned to seek an appeal after authorizer Ball State University revoked its charter, but now officials say the school will look for a new sponsor. At least one local school district, East Allen County Schools, already declined to sponsor the school.

One of schools whose charter Ball State University revoked earlier this year has dropped its appeal, reports Sarah Janssen for The Fort Wayne Journal Gazette:

Johnson Academy’s appeal hearing was scheduled for today, but the Rev. Mike Nickleson, board president, released a statement Wednesday saying the school believed an appeal hearing would be “fruitless.”

“We feel that (Ball State) and (Johnson Academy) are at an impasse,” Nickleson said in the statement. “Our desire to serve the at-risk community cannot be met under the current authorizer, and so we respectfully choose to withdraw our appeal of their decision.”

Ball State officials have said the decision was made because the schools failed to meet certain academic standards and couldn’t demonstrate sufficient improvement. The university respects Johnson Academy’s decision not to pursue an appeal, said Joan Todd, executive director of public relations for Ball State.

The school has had difficulty achieving certain benchmarks because of the population of students it serves, Nickleson said. Nearly 99 percent of students are minorities and about 95 percent qualify for free- and reduced-price lunches, a common measure of poverty.

Instead of appealing to Ball State to reverse its decision, Nickleson says Johnson Academy will look elsewhere for a new sponsor. But the school has already been turned down by at least one nearby district, East Allen County Schools. Neighboring Fort Wayne Community Schools recently adopted a resolution opposing new charters in the area, making it an unlikely authorizer.

In Indiana, local school boards, schools of education, the Indianapolis mayor’s office and the Indiana Charter School Board can all sponsor schools. Historically, Ball State has been the only school of education to issue charters. But now Calumet College has entered the game, stepping in to help Charter School of the Dunes in Gary after Ball State yanked its sponsorship.

That’s led to allegations of “charter shopping” from proponents of accountability.