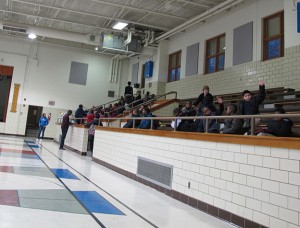 Students at Timothy L. Johnson Academy in southeast Fort Wayne gather in the school's gymnasium at the start of each day. Here, they say the Pledge of Allegiance together along with a second creed in which they "accept the challenge to be the best that they can be."

EACS board President Neil Reynolds read a prepared statement at the start of the meeting saying the consensus of the board doesn’t support sponsoring the charter.

“We believe that the focus of the district’s resources must remain on developing and improving our current school system,” Reynolds read. “We are committed to every student in the East Allen County School district and promise to pursue the best in education to those students.”

Discussion instead focused on what, if anything, the district would do to offer different options for students in the area.

Paul Harding High School closed for the 2011-12 school year because it was at risk of being taken over by the state because of consecutive years of poor performance. Students who would have attended Harding were then to choose another high school within the district. A year later, the district opened the East Allen University early-college magnet program in the former school, which also houses Paul Harding Junior High School seventh- and eighth-graders.

“There is a need for a safety net. Someone has to fulfill that,” Nickelson says. “Yes, we’d all like for our schools to do extremely well and for the bottom to be as good as the top. But there is a bottom. Someone has to care for it. We’re that people. We care.

Ball State pulled its sponsorship from seven schools in January. At least one, Charter School of the Dunes in Gary, has found a new sponsor — Calumet College.