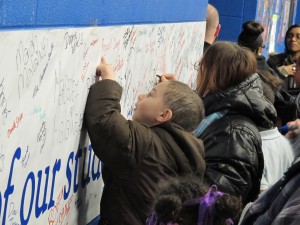 A young boy signs his name to a poster advocating for Gary's Charter School of the Dunes to remain open. Ball State University officials have revoked the school's charter.

Seven Indiana charter schools are now in danger of closure, their Ball State University overseers say, because the schools’ leaders aren’t meeting academic performance objectives they set forth in their founding documents.

State data show the rates at which these charter schools’ students pass statewide tests are lower than the traditional public school districts which surround them.

It’s one of several reasons Ball State University officials are revoking these schools’ charters. All seven are appealing the decision.

But leaders at some of the schools whose charters are at risk say there’s a counter-narrative in the numbers.

Many of the students they serve come from transient or difficult-to-serve populations, many charter school administrators argue. But the performance of students they’ve served for more than a year, they say, is markedly better than the students who’ve just enrolled.

To shed some light on the data on these schools’ academic performance, we’re posting a rundown of the seven charter schools’ ISTEP+ pass rates.

We’re also posting a link to each school’s charter renewal application to Ball State University, in which school officials present their own school performance data. Take a look:

Charter School of the Dunes (Gary)

The ISTEP+ pass rates above reflect the rates at which students pass both the math and English/Language Arts portions of the test.