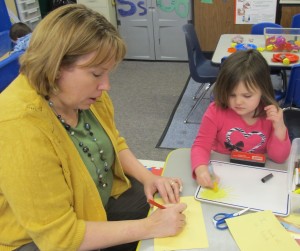 A proposal to use a shuttered elementary school as an early learning center is contingent on Richmond Community Schools receiving a Head Start grant.

But the school district isn’t the only one with plans for the building. A charter school for diploma-seeking adults is also interested in the space, writes Brian Zimmerman for the Palladium-Item:

Last summer, RCS closed C.R. [Richardson Elementary] as part of a cost-cutting master plan and put the building on a required list of vacant schools that is administered by the Indiana Department of Education. By law, public schools have three years to find an educational use for a vacant building or risk losing it to charter schools, which get first crack at purchasing it.

“We’re complying with the spirit and letter of the law, but the letter isn’t very clear,” [Superintendent Allen] Bourff said.

But Bourff said he wants to maintain possession of the two-floor building in the foreseeable future and sees both the Excel Center and Head Start as ideal fits, and possibly other community organizations seeking space.

A decision on Head Start remains a waiting game. RCS, and other known grant applicants, including Community Action of East Central Indiana, which operates Head Start in Wayne County, have been waiting for a decision since late last year.

We’ve written before there’s a sense of urgency for the school district to fill the building because state law gives charter schools first dibs on unused properties. The Kenneth A. Christmon STEMM Academy had been identified as a potential landlord for the vacant property before Ball State University didn’t renew its charter.

At the same time, the state legislature is considering changes to the law overseeing the sale of unused school buildings. The Indiana Senate could vote this week to shorten the timeline so districts would only have to wait two years to unload an empty school rather than four.