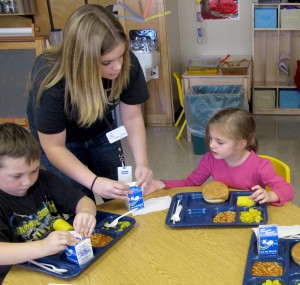 A teacher helps a student open her milk at Busy Bees Academy, a public preschool in Columbus.

What will President Obama say about education during Tuesday night’s State of the Union address? Maybe not much, writes Alyson Klein for Education Week‘s Politics K-12 blog:

In some of Obama’s previous State of the Union speeches, K-12 education, in particular, has gotten a lot of attention. But, now that the Obama administration’s has given more than 30 states waivers under the Elementary and Secondary Education Act, K-12 policy may take a back seat to pre-K.

Klein notes that the Center for American Progress, a liberal think tank closely aligned with the Obama administration, unrolled a plan last week to enroll more 3- and 4-year-olds in preschool.

According to the Associated Press, that proposal would cost nearly $200 billion to implement in the next decade:

Under the center’s plan, Washington would match states’ spending on these preschool programs for 3- or 4-year-olds at an average rate of $10,000 per child — enough to cover full-day programs. The program would be phased in over five years, starting first with low-income students who, studies show, benefit the most from pre-kindergarten programs.

Children ages 3 and 4 would be eligible to attend preschool for free if they come from a family of four earning $46,100 or less. For families making more than that, the rates would be adjusted based on income.

The benefits of high quality early childhood education are almost universally recognized. But with lawmakers split on how to pay for pre-K, any program with a large sticker price is likely to meet resistance in Congress.

The outline from the Center for American Progress calls for partnerships between public schools, charters, Head Start programs and established child care providers — choice options the AP says could win over Republicans.

If this approach sounds familiar, Indiana lawmakers are considering a preschool pilot that looks a lot like the state’s existing voucher program. The Republican-backed proposal has the support of Gov. Mike Pence and passed out of committee last week. A similar bill — this one from a Democrat — hasn’t gained traction. The difference? It centers around building a public program rather than relying on the state’s existing private providers.

So Is A Push For Federally-Funded Preschool Coming?

Perhaps the best indicator Obama will touch on pre-K in his State of the Union speech is his travel schedule later this week, which includes a Thursday stop at a Decatur, Ga., preschool that’s run in partnership with the school district and local Head Start program. From The Atlanta Journal-Constitution:

Although White House officials are mum on the details, several people briefed on the plans said Obama plans to address a proposal that would give more 3- and 4-year-olds from low-income families a chance to go to pre-k programs. … Georgia is a fitting place for the announcement as the state was considered far ahead of its time two decades ago when it used lottery funds to launch a statewide pre-kindergarten program. In recent years, though, flattening lottery revenues and increasing enrollment have forced the state to reduce pre-kindergarten schedules and increase class sizes.