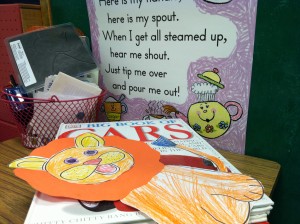 A nationwide report released Tuesday not only highlighted Indiana’s lack of any state-funded preschool program once again; the report also offered an estimate of how much such a program would cost.

Indiana would need to spend $4,130 per child, The National Institute for Early Education Research estimated — that is, if the state were to create a Pre-K program that lived up to the research organization’s standards.

Indiana is one of 11 states nationwide that doesn’t have dedicated state funding for a Pre-K program. Roughly 15 percent of Indiana’s 4-year-olds are enrolled in publicly-funded preschool programs, the NIEER report says — mostly with federal Head Start program dollars. 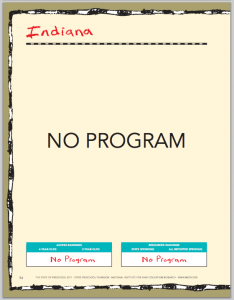 A screenshot of the NIEER report showing Indiana doesn't have a state-funded preschool program.

Nationally, more than 41 percent of 4-year-olds are enrolled in publicly-funded Pre-K programs. In ten states, that figure is higher than 60 percent.

$4,130 per pupil is a little more than half of the cost paid at a private Pre-K we visited in March.

If that estimate* is correct, how much does that mean Indiana would pay for a statewide program in total? The NIEER report isn’t exactly clear on that.

But the numbers do, however, offer a few case studies from other states. Consider Indiana’s four neighbors:

“We’ve got to fund adequately the education system we have. Once we get that taken care of, I suppose you can take a look at the next step,” Rep. Jeff Espich, R-Uniondale, told StateImpact last month. “But I’m not prepared to give up another grade level in school to fund Pre-K.”

As we and others have reported, though, preschool advocates say funding early childhood education helps strengthen the economy. Some say states see a return of 16 percent on their investment in preschool programs.

But education writer Andy Rotherham wants to set the funding debate aside.

“There are plenty of legitimate debates about what works in education, but the importance of early-childhood education is not one of them,” he writes in TIME. “High-quality early-childhood programs help kids in school and in life.”

Do you think we can afford the cost of preschool at $4,130 per kid? We’d love to hear your thoughts.

* How did the NIEER come up with its estimate, by the way? The reports author’s write:

State estimates were constructed from a national estimate in the Institute for Women’s Policy Research report, Meaningful Investments in Pre-K: Estimating the Per-Child Costs of Quality Programs, and adjusted for state cost of education differences using the state cost index from the Institute of Education Sciences report, A Comparable Wage Approach to Geographic Cost Adjustment.