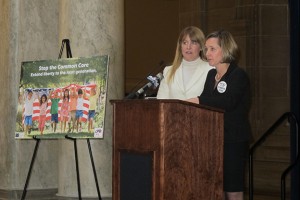 A proposal calling “timeout” on Indiana’s rollout of the Common Core academic standards in the state’s classrooms cleared its first legislative hurdle Wednesday.

Senate Education Committee members voted 7-4 to send a bill to the full Senate that would block further implementation of the standards until the State Board of Education conducts a review of the standards and holds public hearings in each of Indiana’s nine congressional districts.

Though Indianapolis parent Heather Crossin backed Republican Sen. Scott Schneider’s initial proposal to pull the state out of the Common Core entirely, she told Indiana Public Broadcasting she was pleased with the compromise.

“I think it’s wonderful that we’re finally having a timeout and a halt,” Crossin told IPBS statehouse reporter Brandon Smith. “We can finally have the proper review of the standards that the state of Indiana, the students, the parents, the teachers all deserve.”

But opponents were quick to call on the full Senate to kill the bill, saying the bill creates too much uncertainty. (Educators have already deployed the standards in kindergarten and first grade classrooms statewide and were set to implement them in second grade next school year.)

“These standards are too important to students to delay what is already thee years in the making,” Justin Ohlemiller, executive director of the advocacy group Stand for Children Indiana, said in a statement. “We are certain Common Core would withstand the scrutiny of public hearings, but leaving schools in limbo for a year isn’t fair to teachers and certainly isn’t fair to students.”

Mike Petrilli agrees. He’s executive director of the D.C-based Fordham Institute, a think thank that supports the Common Core. Petrilli says this compromise would be “the worst thing they could do,” because rather than sending a clear signal about the future of the Common Core, lawmakers would send a mixed message.

“Indiana schools were moving full speed ahead and doing the work that they have to do, because in 18 short months, they’re gonna need to be implementing these standards and getting ready for Common Core assessments. So this is really bad news,” Petrilli told StateImpact.

State Board of Education members have ardently defended the Common Core, reaffirming their support for the nationally crafted standards at their meeting on Feb. 6.

“I’ve rarely seen an issue more demagogued inappropriately and more misinformation about an issue as I’ve seen with Common Core,” board member Neil Pickett said, adding, “It’s inappropriate for the legislature to opine on this. It’s something that’s supposed to be the bailiwick of the [State] Board and the [Indiana] Department [of Education].”

But members of the group Hoosiers Against Common Core praised the proposal, saying this brings about a long-overdue public conversation about the standards.

“This legislation is strong,” Erin Tuttle wrote on the group’s blog. “It calls for the State Board of Education to do what it failed to do in 2010 when it adopted the Common Core.”

Schneider says the initiative provides a chance for the State Board to revisit Indiana’s original standards, which had won praise from national groups.

“By placing Common Core implementation on pause, we can take the time to discuss what standards we should be using for Hoosier students and hear from Indiana parents, teachers and communities,” Schneider said in a statement. “This process maintains our current method for adopting standards without giving up control to the federal government or national groups.”

The newly amended bill also follows the recommendations of state superintendent Glenda Ritz, who told us last week she wants further discussion on the standards.

Read the text of the Common Core “timeout” amendment here.