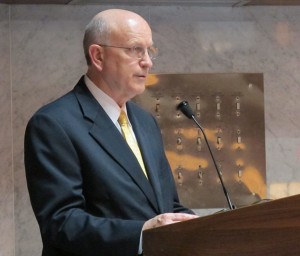 We noted last week Indiana General Assembly members were working on a compromise that would allow further discussion about the state’s adoption of the Common Core academic standards.

It appears the compromise has taken shape, stopping short of pulling Indiana out of the consortium of 46 states that have already adopted the standards — at least for now. From the AP:

Republican Sen. Scott Schneider of Indianapolis tells The Associated Press that he expects the Senate Education Committee to vote today on a proposal to suspend implementation of the national standards while the State Board of Education holds new hearings on what should be included in Indiana standards.

Schneider says the Board of Education would then decide by year’s end whether to change the standards.

Educators have already rolled out the standards in kindergarten and first grade classrooms statewide this year, as we’ve been reporting on. The standards are currently slated for implementation in second grade next school year.

“I’m not taking positions on Common Core necessarily,” Ritz told us last week. “In mathematics, we have to have some conversation about what we’re doing with standards and the assessments and the delivery system that we’re going to have in place.”

Ritz said she did not support the Common Core pullout bill prior to the amendments, which will likely be unveiled at the Indiana Senate Education Committee meeting Wednesday afternoon.

Do you have questions about the Common Core? Be sure to head over to our Core Questions topic page, send us an e-mail with the subject line “Core Questions” or tweet your queries to the handle @StateImpactIN. We’ll try to find the answers and share them here on StateImpact.